Farmer: A Day in the Life 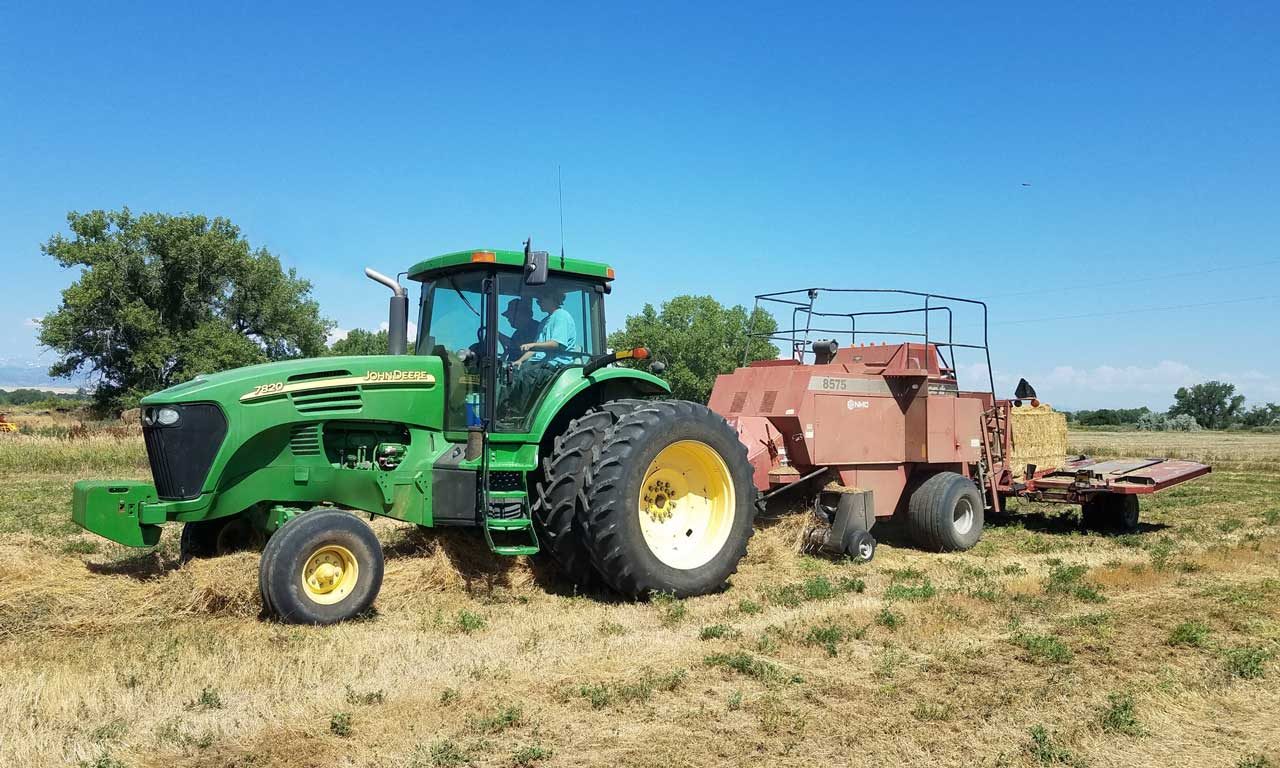 Maneuvering along a busy highway in a large swather, Keith Bateman answers his phone, accepting his 48th call on a sweltering day in mid-July. Keith’s line of work is not bound to an office, and multitasking is essential for a business that relies on delegating chores that are dispersed throughout Boulder County.

As a Boulder County Parks & Open Space agricultural tenant, Keith’s experience offers an excellent insight into the daily fortunes and failures encountered by the agricultural community. His ancestry on these lands dates back to 1859, when his great-great-grandfather, Adolph Waneka, acquired land in the county. The Bateman family comes from a line of six generations of farmers, including operations run in collaboration with his son, Cory. Keith has expanded the land he oversees to more than 50 times than his initial land investment, which he undertook at the age of 16.

Having dealt with development pressures from the start of his career, Keith remains keenly aware of the frequency and magnitude of conflict with residential/commercial inhabitants. Many of Keith’s previously farmed assets have been converted to development, bringing his existing leases closer to the urban confluence. “I have and have had many farms in the area surrounded by sub-divisions, both residential and commercial,” he says. “[If you make changes to an operation], some people can get upset, and no matter what you do from that point forward, they will look at it as being wrong.”

Still, Keith’s commitment makes it apparent that he would farm more land if it was possible. For now, his sights remain fixed on recovering a crop yield devastated by hail in June—a storm that another tenant referred to as the worst he’d seen since the early 1970s, with an estimated 50 percent loss on affected croplands. It was clear that any field day presents a host of such unforeseen obstacles: vehicle hindrances, problematic dirt roads, fencing damages, machine breakdowns, navigating water limitations/diversions, neighbor issues, escaping livestock, harsh weather, and access to labor.

Accordingly, the first task of the day was met with complications: a large center-pivot irrigation sprinkler was misaligned, and its electrical generator was stalled. After contacting the generator company for help, Keith goes quickly over to his nearby “Eddy” property where he discovers numerous leaks in a pipe pumping out of the supply pond. To accommodate the lost water, he adjusts the flow to the sprinkler while coordinating efforts to repair the piping holes at a later juncture.

While completing these errands, Frank, one of Keith’s four full-time workers, happily completes ditch maintenance and livestock supervision at the Warembourg-Louisville property. Here, Frank has been moving the irrigation channels to establish optimal water flow into the pasture—a labor-intensive task when the technology available is confined to a shovel. Luckily, the ditch was watering properly, and the cows grazing blissfully.

On the Bailey-Kenosha property, Keith is found baling hay, monitoring the knot-tying mechanism that holds the bales together (approximately 700 pounds each). After finishing the field, it was time to move the baler to another of Keith’s properties. Following lunch, Keith again had to move heavy equipment down Highway 287. Many Boulder County farmers do not live on their farmed properties, or farmlands not contiguous with their home dwellings, so moving machinery on busy roads is a dangerous necessity.

Keith soon arrives with the swather at a private landlord’s property to mow their field, during which stray tree branches and trash blown-in from the nearby neighborhood impede continuous movement. To complicate matters, the swather suddenly stops cutting—likely due to a blown out fuse or relay failure. More mechanical failures follow: another baler, along with a tractor, would experience debilitating problems. Though Keith would later deem these issues less pervasive than they appeared, these calamities consistently upended productive work time. However, good news would soon arrive. A serviceman repaired the electrical generator powering the center-pivot, allowing it to function properly for the first time since the hailstorm.

As the day draws to a close, Keith’s phone call count climbs above 80. His workday extended past 9 p.m., totaling 15 hours. For most, this is an unsustainable rate of working. Indeed, the profession suits those who are physically and mentally versatile, who can balance political and social pressures, retain their personal values, and withstand the tribulations of systemic impediments.

The Appeal of Farming

This all begs the question: what is the reward in farming? It seems profit is not the main attraction. Rather, pride in the process of farming and the creation of an important product itself is the real appeal. “In agriculture, you have to be very flexible,” says Keith. “Years of farming and being close to town have taught us how to deal with all of the unforeseen circumstances that might come up.” Indeed, dealing with circumstances that arise seems to be the way of the farmer.