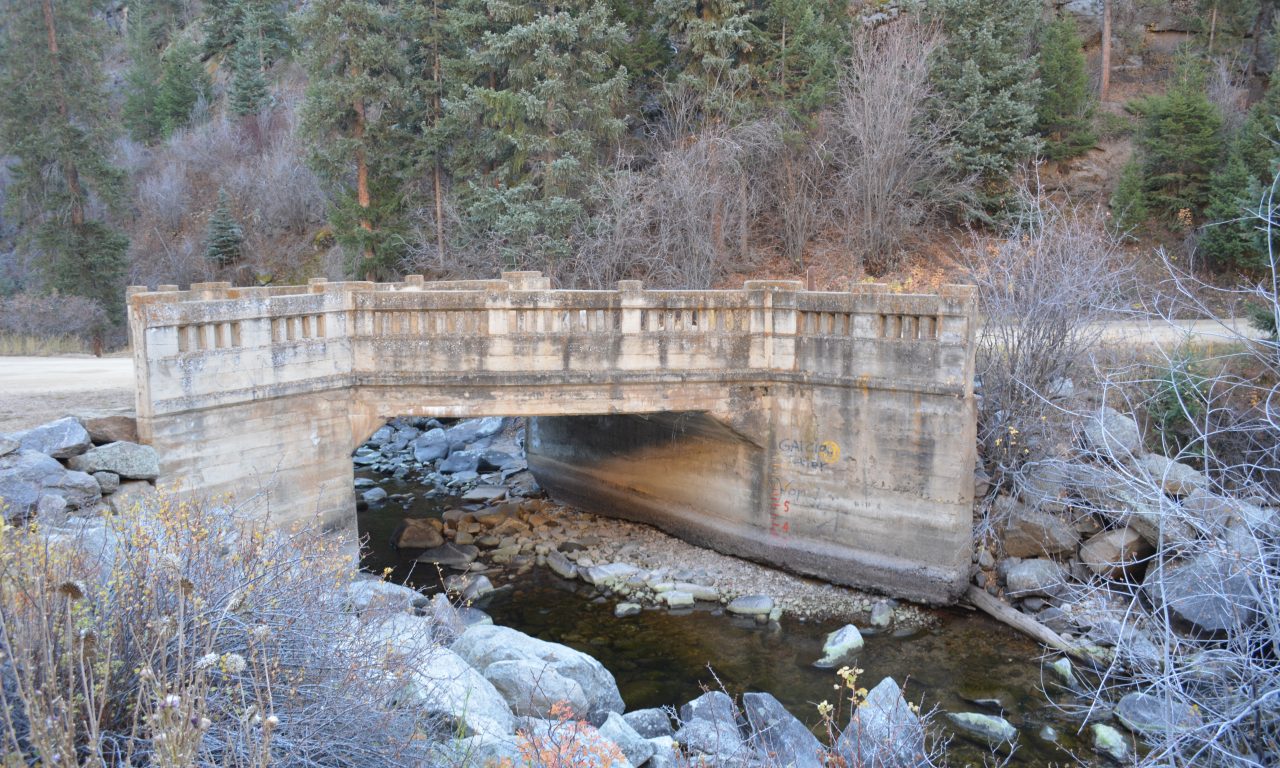 In the foothills of the Rocky Mountains lies a canyon—quiet, secluded, and remote. It is home to mule deer and Steller’s jays, mountain lions, and foxes. Tall pines shoot upwards from their roots which cling surprisingly well to the steep, precipitous, rocky walls. Below, a cold creek fed by the winter’s melting snows, rushes past boulders, and American dippers flit to and fro amidst the turbulent waters. This describes Boulder Canyon prior to the 1850s. A rugged, sheer corridor running between the mountains and plains, it is only in the past 165 years that humans have progressively forced their way through the canyon carved by Boulder Creek. Today we drive on a well-maintained state highway along this pathway, but the natural beauty of the rugged canyon remains on the steep walls above our heads, and remnants of earlier human history can be found not far from where the tires of our cars tread.

Roughly 13 miles up Boulder Canyon from Boulder, a prominent formation known as Castle Rock stands independently from the canyon walls on the south side of the road. In the summertime its base is peppered with families enjoying picnics by the creek and rock climbers dot the grey stone above. Castle Rock is accessed easily by car, thanks to two bridges that cross the creek and a dirt road which wraps around the south side of the formation and back up towards the main thoroughfare of Colorado State Highway 119. This small stretch of road and its two bridges are not only useful to many canyon recreationalists, it is also a remnant of a long and storied past that brought people into and out of the mountains through Boulder Canyon.

Prospectors who amassed in Colorado during the gold rush of 1859 began to blaze trails up placer-rich mountain canyons with hopes of finding wealth. These crude paths eventually became the basis of mountain roads. 1871 brought the completion of the Boulder Canyon Road, which was later extended to Caribou due to a large silver strike in the mountain mining community of Caribou. With 33 total creek crossings, the responsibility of maintaining the road fell to Boulder County in 1887, and with the advent of the automobile the importance of keeping the road in good condition increased significantly.

The Work of Convicts

In 1913, the Boulder Canyon road was made part of one of the primary roads in the state, and in 1914 the first major construction on the road began. The labor was done by convicts from Cañon City, and despite the major setback of an enormously destructive flood that summer, they still managed to reach Castle Rock by 1917. Here they found two already extant bridges, but demolished them and rebuilt both the upper and lower bridges by the end of the year. The road was fully completed by 1919 and in 1923 it became Colorado State Highway 119.

Being in a steep canyon, however, the road was continually bombarded by rockslides and creek washouts and road maintenance continued. In 1947 some significant rerouting of the road was completed and the road was moved from the south of Castle Rock to the north, thus abandoning the two bridges and miles of convict-built road on the southern side. Other similar bridges were avoided and eliminated by rerouting, and by 1955 only three of the original 33 creek crossings on the road remained.

Taking a walk or drive around the south side of Castle Rock allows us to step into the dynamic past of expansion in the American west driven largely by the increase in prominence of the automobile. The two bridges of Castle Rock still stand today as essentially unaltered examples of the formative construction of early highways, especially by convict crews.