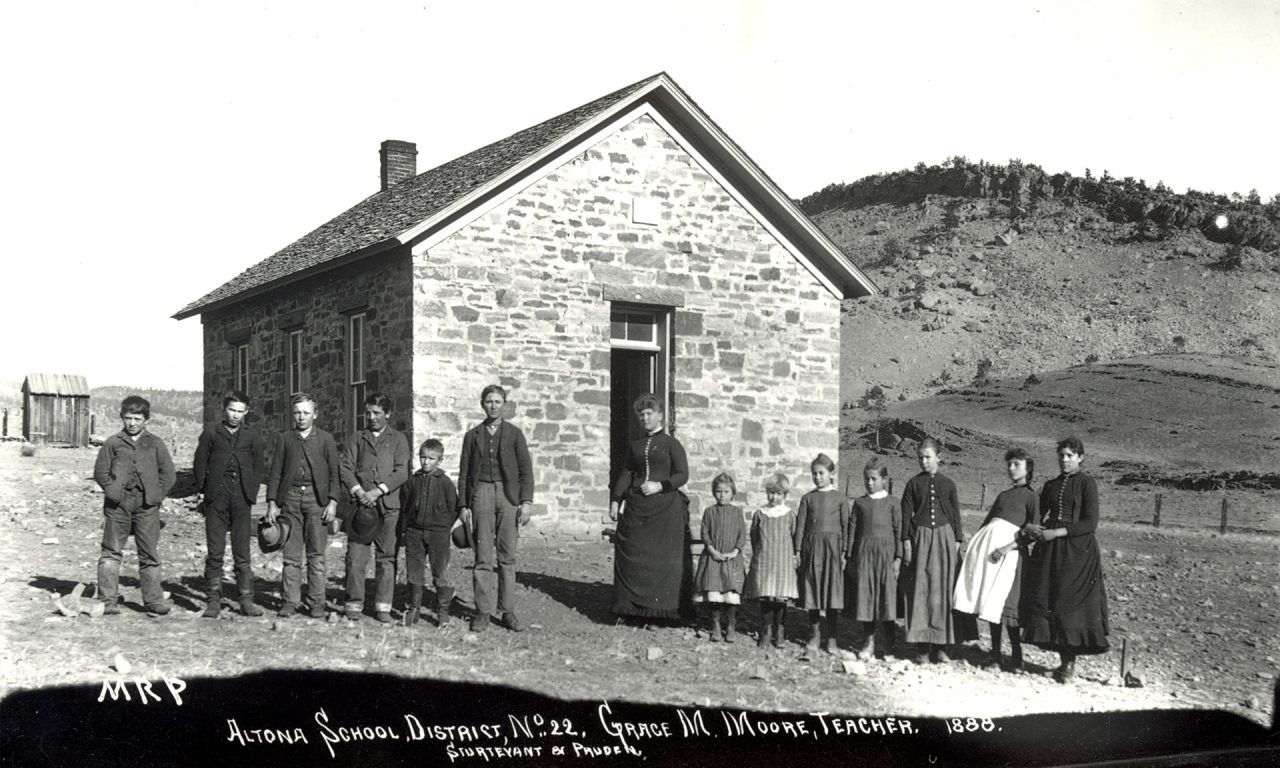 The Altona area operated as a supply and transportation center in the mid-to-late 19th century. It served the needs of miners and others, who following the mining boom utilized Left Hand Canyon as their major transportation route. Where the community got its name is a mystery. There are other regions called Altoona, so perhaps this community was named as a variation on that.

As with many growing communities at this time, a formal place of education soon became a priority. In Colorado between 1861 and 1876, school districts were governed by territorial law, each operating independently. Ten school-aged children needed to be living in a proposed district before a petition for official recognition could be submitted. By 1873, the Altona community met the minimum student number requirement and on October 9, 1873, Altona became Boulder County’s School District No. 22.

In 1880, the Altona community completed the one-room stone schoolhouse that we see today. The schoolhouse is a perfect example of a utilitarian design—it lacks stylistic details and reflects the use of locally available materials. The schoolhouse featured one open room, a stove, student desks, a teacher’s desk, and a chalkboard. Light filters through six tall glass windows and a transom window over the entrance door. A privy, located to the north of the building, remains.

During the first school year in 1880, 18 boys and 22 girls, ranging in age between six and 21, attended 60 days of school. In subsequent years, records show the student population fluctuating from a low of 19 to a high of 41, numerous teachers, and a range of school days from 60 to 139.

By the 1930s rural education across Colorado, faced with the devastating effects of the Depression and Dust Bowl, began to decline. After World War II, school districts across the state began consolidating because of the compounded effects of declining rural populations, deteriorating schools, and improved highways. Although the areas around Altona began consolidation steps in 1948, the Altona school district voted against consolidation since the district high school would be located at the Ryssby School (located on 63rd St, just north of Prospect Rd) and not in Boulder.

The official end of the Altona School District came at a special election held in 1950 at the Left Hand Service Station. Altona’s 20 voting citizens, by a margin of 16 to four, voted for consolidation with the Altona Consolidated School District since they were offered the option to send their children to Boulder for a small tuition fee.

After the school closed, the Heil family purchased the building from the school district and converted it into a residence. The Boulder County Parks & Open Space Department is restoring the building back to its period of significance as a schoolhouse.

After restoration is completed this year, the Altona School will be furnished with items typical of an 1880-1900 schoolhouse. The Longmont Questers (Saun Seeray chapter) donated a vintage teacher’s desk similar to a desk once found in the schoolhouse. Because student desks were procured from several sources, an eagle scout project led by Josh Schultheis in 2018 refinished all of the old-fashioned desks.

The site is well-suited for local school field trips. Students will be able to experience what it was like to go to a one room school during different historical eras. Field trips will tie into local, state, and national school curriculum standards. Field trips can also be extended to include a nature hike on nearby Heil Valley Ranch trails.

More information about scheduling a field trip can be found at Field Tip & Program Requests.