What’s With All the Weeds 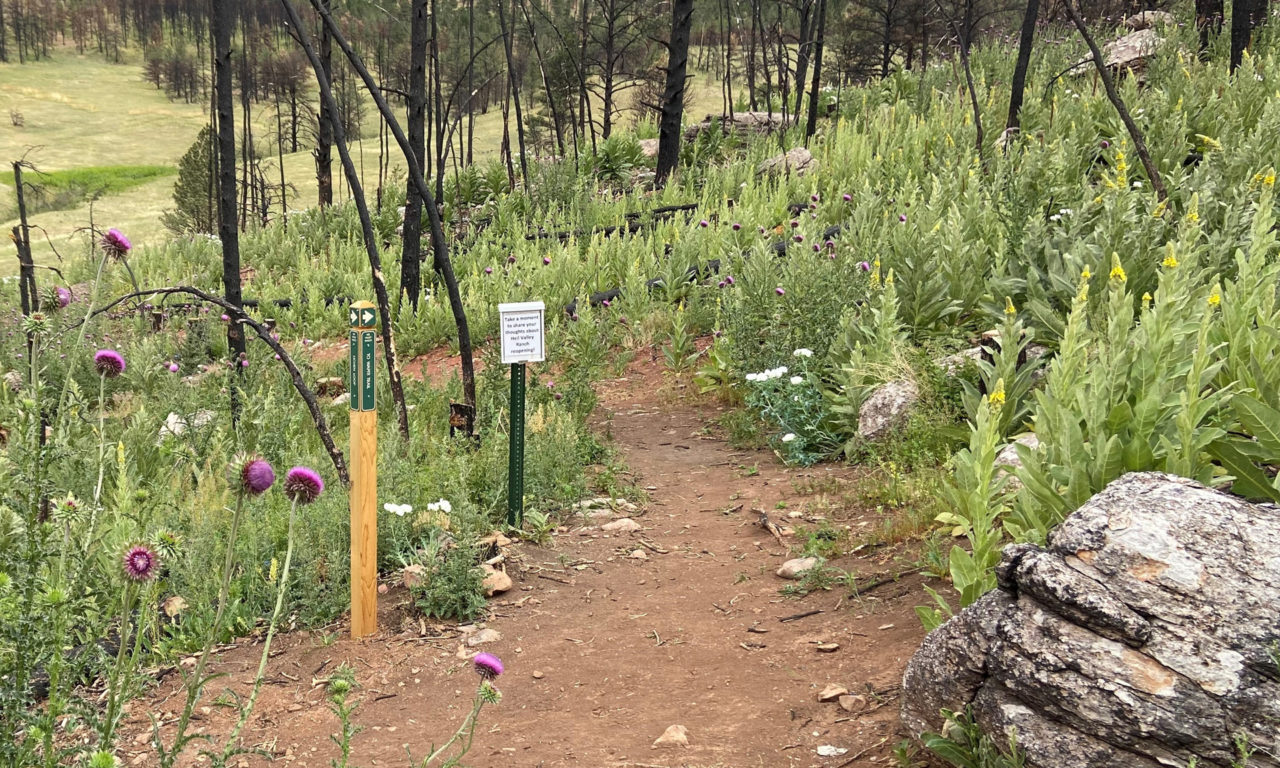 If you’ve been to Heil Valley Ranch since it reopened to the public in June, you’ve probably noticed the profusion of weeds, especially thistles and mullein. Although mullein, thistles, and other invasive weed species were present before the Cal-Wood Fire in October 2020, they are especially prevalent on the post-fire landscape.

With closer attention, you may find that these weeds grow most densely in patches, often surrounded by bare, burnt ground. These patches are typically where trees used to grow, providing plenty of fuel to burn hot and kill any plants and most seeds on the ground pre-fire. Around these patches, you may find areas of grass, native wildflowers, and shrubs that were burned less severely and have recovered well.

Why do thistle and mullein survive in the severely burnt areas when the native plants don’t? For mullein, two factors contribute. One is a game of sheer numbers; mullein produce tall stalks with many flowers that produce thousands of seeds, which can remain viable in the soil for a century. Even in severely burned areas, some of those seeds will survive. Secondly, mullein seeds germinate in response to light. With the shade of the trees gone, more seeds have received the signal to start growing. Thistle, on the other hand, produces many seeds that can travel far and wide, and do well in recently disturbed areas. We have native thistles too—make sure you know the difference before you start to bad mouth every spiky plant you see!

Although mullein and thistle currently dominate the severely burned areas of Heil Valley Ranch, less severely burned areas have seen an increase in native wildflowers. Many of our native species actually rely on fire as part of their life cycle, and even the ones that don’t may still benefit from having more sunlight and resources available to them in the absence of trees and built-up dead plants from previous years. “For now, treatment of these weeds will be delayed as we wait for more of our native plants to get established. This will help provide better competition with invasive plants,” said Invasive Plants Supervisor Joe Swanson. Although the weeds may be annoying for the time being, patience is an important part of recovery.

After the 2003 Overland Fire, Heil Valley Ranch’s resident ranger, Kevin Grady, observed that mullein and thistle populations exploded but gradually decreased over the course of five to 10 years, and more native species returned. Grady also emphasized that visitors should “stay on trail, and… clean off seeds from clothing, backpacks and bikes after visiting Heil… to keep weeds from spreading to other open space areas.”

Besides mullein and thistles, Heil Valley Ranch has other invasive species, including the only Colorado population of the List A (highly invasive) species rush skeletonweed. According to weeds specialist, Shursteen Sharpe, “If you see this plant, please do not take it with you and report any sightings through our webpage: boco.org/weeds. A great way to distinguish this plant from look-alike plants is by the latex sap it produces when broken and the red/brown hairs that can be found 10 inches from the base of the plant, and no other hairs are present.”

Besides preventing the spread of invasive plants, we can also help the native plants along in some areas. After the fire, dead trees close to the trails were cut for the safety of visitors. These trees were then ground into mulch and lifted via helicopter to some of the worst affected areas of the fire. The mulch will help to prevent erosion and build soil, and in some areas, native seed mixes have been scattered along with the mulch.

While the Cal-Wood Fire has drastically changed Heil Valley Ranch, plants continue to grow, compete, and thrive—sometimes, whether we want them to or not!