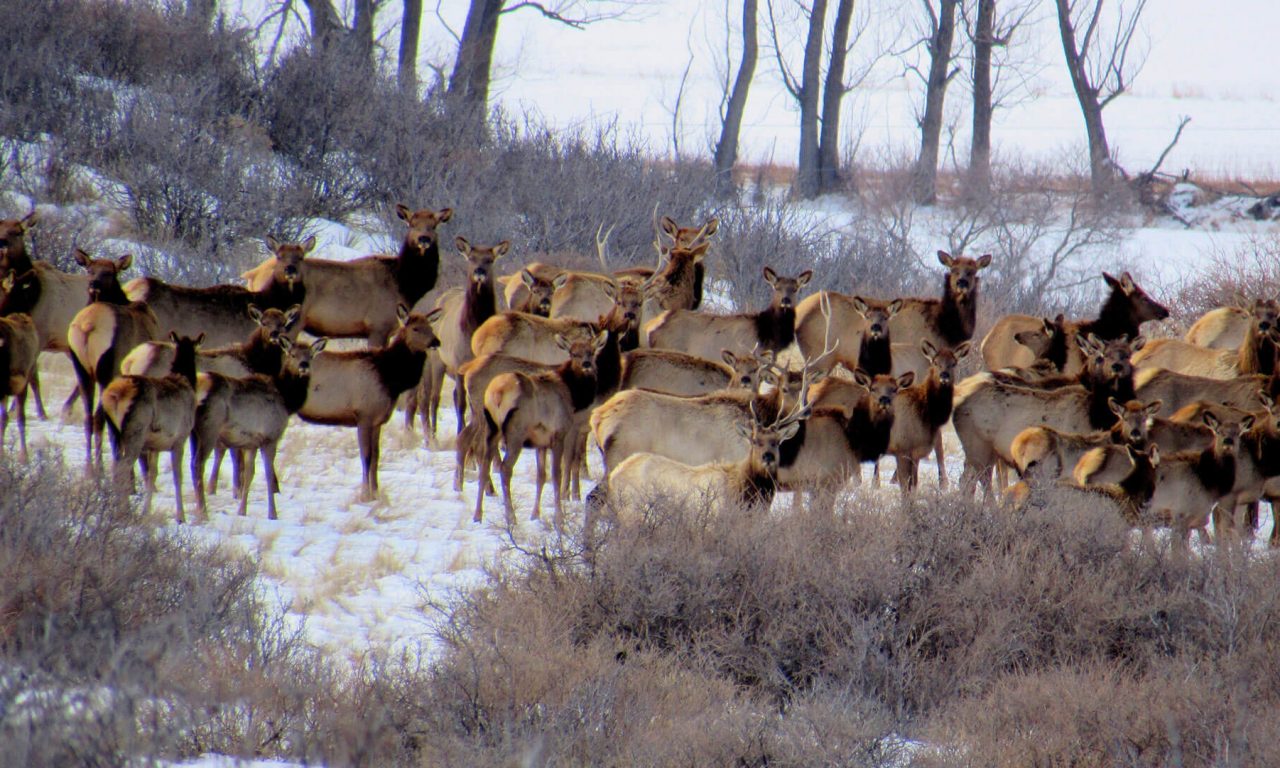 The Boulder County Parks and Open Space (BCPOS) current management plan for Ron Stewart Preserve at Rabbit Mountain was created in 1985. Interestingly, it barely mentions elk, as they were really not part of the Rabbit Mountain landscape 30 years ago. Contrast that with a fall count in 2016 of 360 animals, and the story has changed. The elk population has grown ten-fold in the past several years, buoyed by enhanced survivorship of more and more elk. The current nature of the use and travel patterns of this elk herd is causing issues across the northern part of the county on and around Rabbit Mountain.

The herd has chosen to use areas on the open space far from concentrated human use that still provide those things all wildlife need: food, cover, water, and space. It also provides refuge from hunting. This core area the elk inhabit is the sparsely-forested area south of the Eagle Wind Trail. Staff began seeing habitat impacts from this use over time, and vehicle collisions, crop damage, and neighbor complaints to Colorado Parks and Wildlife (CPW) increased.

These growing issues brought BCPOS and CPW together to work on them.

Our primary goal was to manage for a sustainable elk population on the landscape by monitoring objectives in four areas of concern:

Since 2015, we monitored elk distribution and movement patterns with radio collars on some of the elk. Initial data showed short, daily movements back and forth from Ron Stewart Preserve at Rabbit Mountain Open Space to private lands to utilize irrigated fields. As the herd grew, some of the distances increased, and the groups did not always return to Rabbit Mountain the same day. It has also shown that the herd did not migrate, choosing instead to remain year-round in the area.

A Plan is Approved

CPW enhanced hunting opportunities on private lands surrounding Ron Stewart Preserve at Rabbit Mountain by creating a special liberalized hunt unit in 2015. But the elk herd has largely frustrated these efforts by being nocturnal and keeping to open space. The accumulating conflicts and resource damage became too much to manage the way we were going, so we developed a plan to add Ron Stewart Preserve at Rabbit Mountain Open Space to the special hunt unit. After a series of public meetings, with plenty of citizen input, the modified plan was approved by the Board of County Commissioners (BOCC) in June 2017. This multi-faceted plan contains limited hunting as its centerpiece, along with fencing, hazing, and continued vegetative monitoring.

The park and trails will close three days each week, September 11, 2017 through January 31, 2018, in order to conduct this management safely. Hunters will be drawn from those that already possess the 2017 special unit tag, and they will receive an orientation and have to pass a proficiency test. The open space, trailhead, and trails will be open Thursdays through Sundays.

The three-year plan should begin to address all of our objectives in short order, although vegetative response will be slow. The radio collars will allow us to follow the elk as they respond to the increased hunting pressure and lack of a safe haven, and whether some of them establish a migration pattern (or abandon Rabbit Mountain altogether).

We hope to get to a point where hunting is greatly reduced or discontinued for long periods of time. The plan will also have periodic check-in and reporting to the public and the BOCC, to make sure we are on track, making progress, and operating safely.