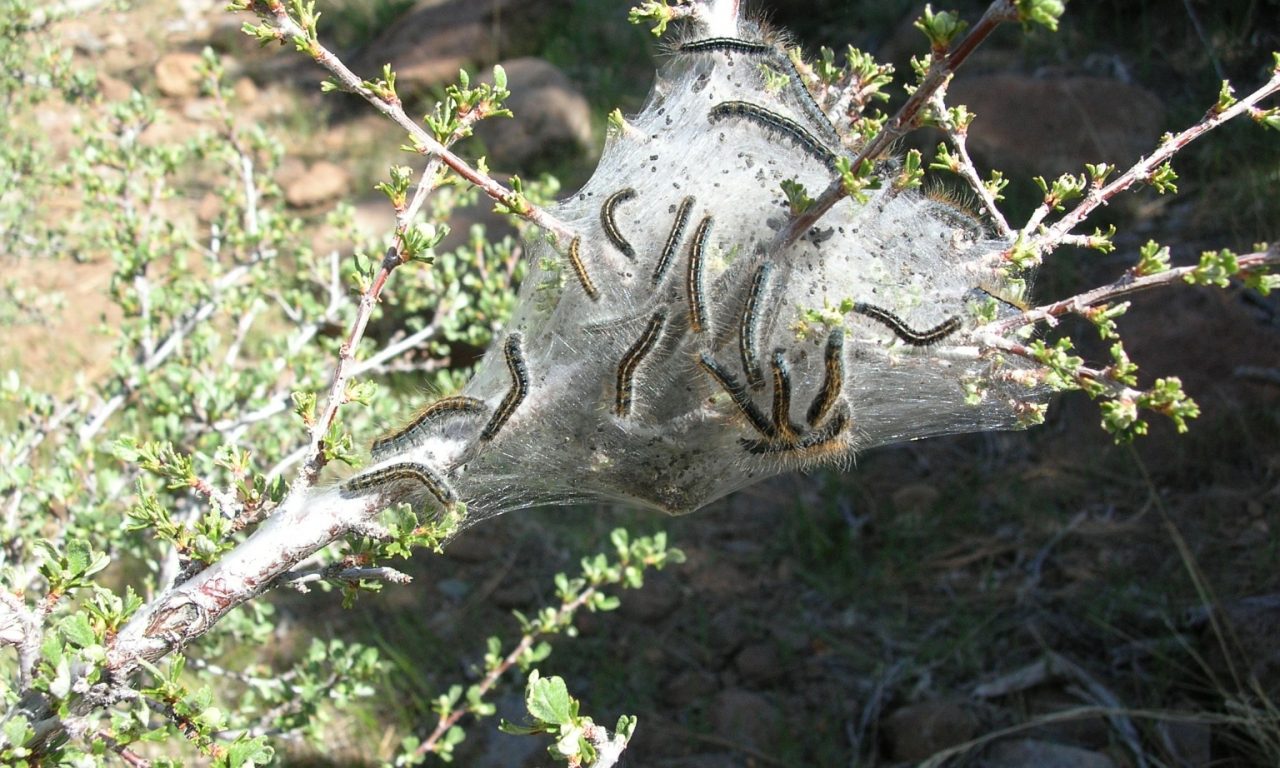 The following is a summary of a 2016 study conducted by Elizabeth Barnes, a doctoral candidate at the University of Denver. Her project focused on the competition and community interactions of the western tent caterpillar.

Competition is one of the fundamental structuring forces in most communities (e.g., Volterra 1926, Lotka 1932, Gause 1934, Connell 1961, MacArthur and Levins 1967), yet indirect competition has been historically misunderstood and misrepresented (Kaplan and Denno 2007 and references therein). My dissertation research investigates not one, but three separate effects of competition in a single community. I study the intraspecific, interspecific, and community wide effects of competition between two generalist species.

While all organisms influence their communities, some species play a more prominent role. Ecosystem engineers are organisms that alter their environment and shape their community by drastically modifying their habitat (Jones et al. 1994). Ecosystem engineers transform their environment to fit their needs and in doing so create habitat diversity that has ripple effects through the entire community (Wright and Jones 2006). Megafauna may be the most visible ecosystem engineers, but organisms that impact microhabitat also have far reaching impacts on 3 communities (Marquis and Lill 2010). The first two sections of my dissertation test how competition drives host-plant use by competing organisms. The third section of my dissertation tests the community wide impacts of a potential ecosystem engineer mediated through competitive interactions.

Competition alters the distribution of host-plant use by the competitor species, which may alter the community of arthropods on those plants. One goal of my inter- and intraspecific competition experiments is to determine how competition shapes host-plant selection. Host-plant selection is often driven by either the chemical or visual cues associated with prior host-plant damage (Renwick 1989). Tent caterpillars can cause large-scale damage to their host-plants and build highly visible structures that alter the landscape of their host-plants (Fitzgerald 1995). These generalist caterpillar species may therefore act as ecosystem engineers (Jones et al. 1994) and affect the survival and distribution of all arthropods on CC, not just the other Lepidoptera herbivores. My experiments test how large-scale leaf damage and distinctive visual cues alter arthropod communities.

Western tent caterpillars (Malacosoma californicum; hereafter TC) are tent-building caterpillars that feed gregariously as larvae through their penultimate instar before dispersing. Larvae construct silk tents that last through the summer and, occasionally, into the next year. While TC can have large-scale impacts on tree health, they rarely kill their host-plants (Cooke et al. 2012). In midsummer, TC adult females oviposit all of their eggs in one group on a tree branch (Fitzgerald 1995). The eggs overwinter on the branch and hatch in the early spring. TC larvae are generalists when considered across their full geographic range, but frequently specialize at a local level (Powell and Opler 2009). My study takes place on the eastern slopes of the Rocky Mountains in Colorado, where I have found that TC prefer chokecherry (Prunus virginiana).