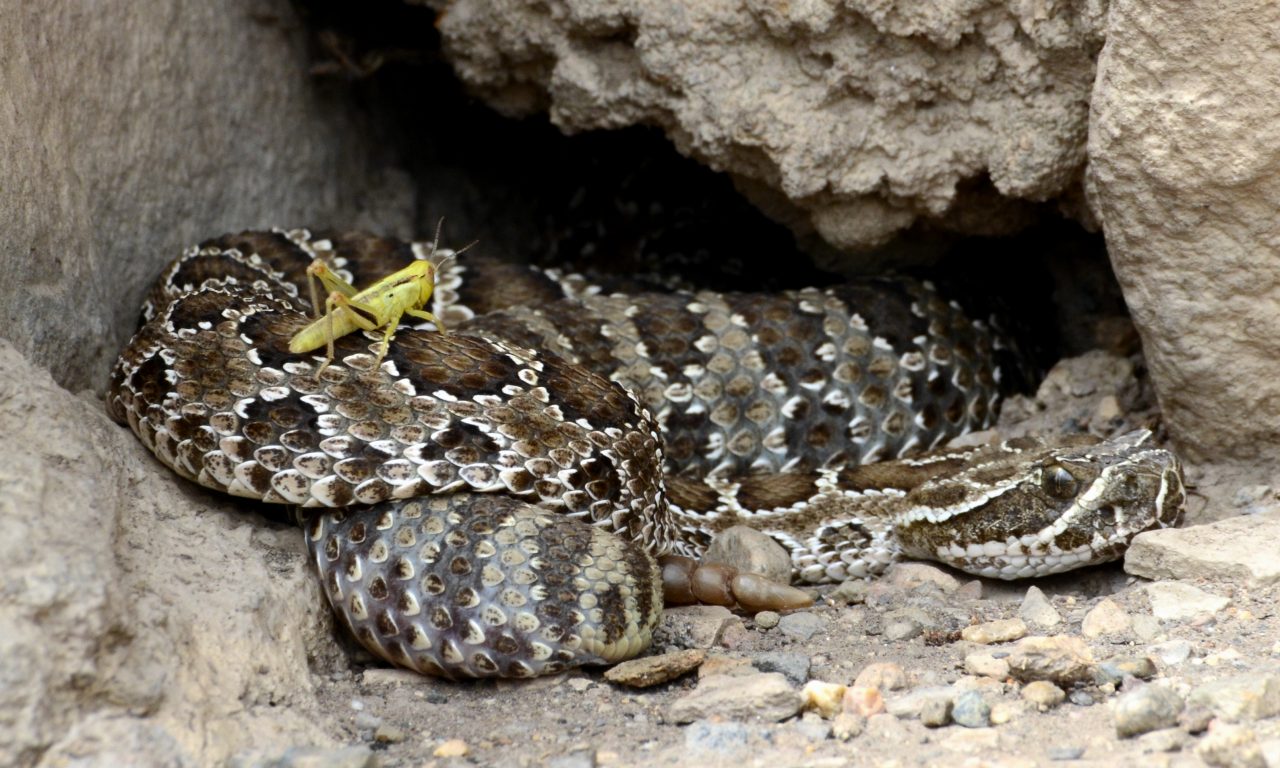 The following is a summary of a 2015 study conducted by Rocky Mountain Biological Services in Fort Collins, Colorado. The research project focused on the identification of winter dens of prairie rattlesnake on Rabbit Mountain Open Space.

For rattlesnakes to survive the winter at higher latitudes they must locate hibernation sites below ground beneath the frost line. Winter hibernacula are a critical habitat resource serving several functions, including avoidance of freezing temperatures and predation, reducing body water loss and use of fat stores (Costanzo 1989), and contributing to sociality behaviors (Clark et al. 2008, 2012). Availability and type of hibernacula may vary greatly with geologic characteristics of the habitat. Hibernacula of Prairie Rattlesnakes (Crotalus viridis) throughout its range may be located in talus slopes, caves, fissures in south–facing canyon walls or rock outcrops, prairie dog colonies, and deep burrows constructed by other animals (Ernst and Ernst 2012). The number of Prairie Rattlesnakes within a single hibernaculum may vary from a single snake up into the hundreds (Hirth et al. 1969, Klauber 1972, Parker and Brown 1975, Macartney et al. 198, Leonhardt and Brown 1990), but communal denning is considered the norm for the species. These communal dens are not exclusive to conspecifics and may contain other reptile, amphibian, and mammalian species (Ernst and Ernst 2012; Kissner and Nicholson 2003).

Prairie Rattlesnakes commonly occur on Rabbit Mountain Open Space (Ehrenberger et al. 2015), a 4,793–acre property containing six miles of public hiking trails. Despite being the most commonly encountered species of snake on the property, there is only one putative den location (Ehrenberger et al. 2015). Our primary objective was to identify locations of winter dens of Prairie Rattlesnake on Rabbit Mountain Open Space. Our second objective was to determine whether this species prefers denning in rocky outcrops, as widely reported in the literature (e.g., Hill 1943, Ludlow 1989), vs. burrows in prairie dog colonies (Shipley et al. 2013). Prairie dog burrows are said to be used by this species in Colorado when rocky areas are unavailable (Hammerson 1999). Rabbit Mountain Open Space offers an ideal setting to evaluate this question of preference because there are numerous rock outcroppings on the property and Black–tailed Prairie Dog (Cynomys ludovicianus) colonies occur in and around these rocky areas. Our third objective was to collect as much movement and habitat data as possible on individual snakes prior to their entering into hibernation. Knowledge of den locations, areas of use for individual snakes, and microhabitat selected within these areas of use, will help managers develop management guidelines for this species and inform decisions on recreational use and public safety (e.g., Gardiner et al. 2013).

Timing of Entrance into Hibernation and Winter Den Identification: Despite loss of transmitters from five snakes during the study, we were able to recover all transmitters and reattach them to new snakes before they selected winter dens (Table 1). By November 9, 2015 all 15 Prairie Rattlesnakes (n = 6 male, n = 9, female) were considered to be at their winter dens. All snakes selected different dens. There was only one den site where we observed snakes other than the transmittered individual (CR213). The hibernaculum used by snake CR213 was an unoccupied prairie dog burrow in the reintroduced colony located on the north central section of the property. On November 9, 2015 while confirming that snake CR213 was within a prairie dog burrow that it had been using previously, we observed an additional adult rattlesnake and a neonate at the burrow entrance. On September 21, 2015 we experienced the first instance of a snake being belowground beyond transmitter range (Figure 2. A). This date coincides with the first substantial decrease in the fraction of the 15 transmittered snakes that were visible (Figure 2.A., i.e., because they were belowground). These events coincide with a substantial decrease in daily maximum air temperature (Figure 2. B.). Daily minimum air temperatures during this period were uninformative other than they exhibited a steady decrease since late September. Freezing nighttime temperatures first arrived on November 5, 2015. We interpret the behavior of a snake going belowground deep enough to cause complete attenuation of the transmitter signal as investigative behavior to discern whether it could get far enough below ground to avoid freezing winter temperatures. All such cases (n = 9, different individuals) occurred in prairie dog burrows, and in each case the previously undetectable snake was detected at a later date at the same burrow. These observations indicate that in November some snakes are moving upwards and downwards within den passageways.