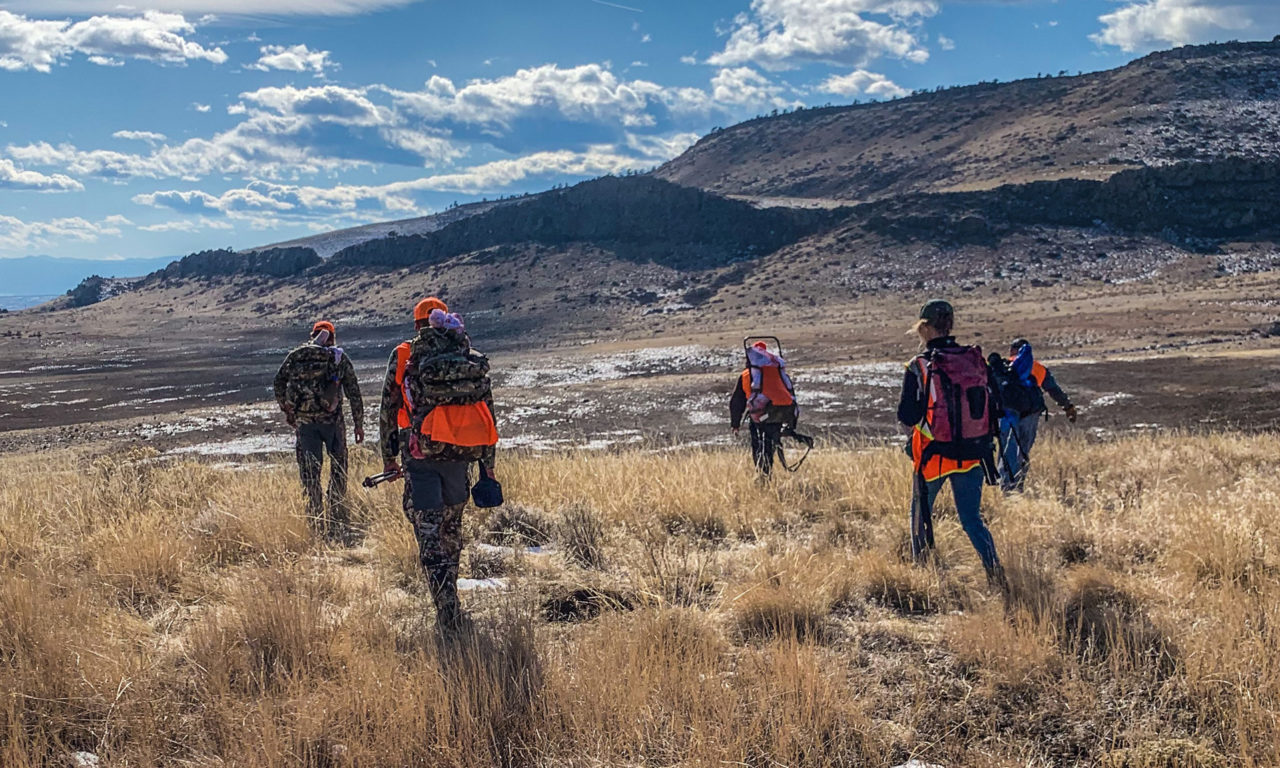 As I crest the saddle between two hogback ridges, dozens of heads turn in my direction—elk! Freezing instantly, I make a quick note of their location and slowly inch back down the slope. After waiting several minutes for the elk to relax, I make my way along the ridgeline and cautiously peek over the top again—this time safely concealed behind some rocks. A few hundred yards ahead of me on the flank of Indian Mountain, a small herd of elk is spread out in an open meadow—some on their feet feeding while others are bedded and basking in the sun. These elk have likely spent the day up here in relative safety surrounded by mountain mahogany thickets and concealed from below by the unique hogback formations jutting from the mountainside. Using binoculars, I repeatedly count the herd making note of the number of cows, calves, yearling bulls (also called “spikes”), two-year old bulls (or “raghorns”), and mature bulls. After multiple counts, I classify 53 individuals in this group of mostly cows and calves along with a handful of yearling bulls. Mature bulls often separate from these cow/calf herds to form “bachelor” groups throughout the spring and summer months.

This elk herd is the result of five years of intensive elk management on the Ron Stewart Preserve at Rabbit Mountain Open Space that included such measures as non-lethal hazing, fencing off key natural resources, and the ultimate establishment of a targeted hunting program. At the time, this controversial decision was adopted as a last resort to address the growing elk herd that exploded from a few dozen individuals in the early 2000s, to more than 360 by 2016. The elk, which had been absent on the local landscape since at least the early 1900s, had discovered an ideal refuge at Ron Stewart Preserve, where they were safe from hunters and had easy access to irrigated crops surrounding the preserve.

Historically, these elk would have spent their winter months down on the plains and scattered throughout the lower elevations of the foothills before migrating each spring to their calving grounds in the high-alpine meadows east of the Continental Divide. With access to such abundant resources, many of the elk that traditionally migrated each spring became year-round residents of Ron Stewart Preserve, choosing to calve and raise their young in the relative safety of the preserve.

Although this turn of events was very favorable for the elk, the local ecosystem, nearby crops, farm and ranching infrastructure, private property, and highway safety all suffered as a result of the ballooning population of the elk herd.

To address the damage the elk were causing throughout the area, Colorado Parks and Wildlife created an elk management subunit in 2014 that allowed a small number of hunters to harvest antlerless elk on private property surrounding Ron Stewart Preserve from mid-August through the end of January. Although this initial attempt to manage the growing herd resulted in 12 successful harvests of cow elk, it did little to address the elk using the open space as a refuge.

After careful consideration and public input, it was decided that a trial hunting program at Ron Stewart Preserve at Rabbit Mountain would be piloted starting in 2017. At the time, it was determined that the ecosystem of the open space can support a resident, non-migratory, elk herd of 30 individuals year-round, and up to 70 individuals with the addition of migratory elk joining the resident herd each winter. The Elk Management Team, recently created to oversee this project, considered hunting a key management tool; not only reducing the number of elk on the landscape through hunter harvests, but more importantly, influencing the behavior of the elk by encouraging the reestablishment of seasonal migration patterns.

Following the first year of hunting in 2017, where 27 elk were successfully harvested on Ron Stewart Preserve and an additional 28 animals were harvested on adjacent private land, the elk herd was estimated at 260 individuals—a reduction of roughly 100 animals from a high count of 360 the year before. Over the next four years, harvest numbers at the open space decreased from a high of 31 in 2018 to just 14 in 2021. During that time, we also saw private land harvests increase—an indication that the elk were spending less time at Ron Stewart Preserve.

Today, as I count these 53 elk lazily making their way across the slope, I can see the success of this program. Five years of management reduced the herd from 360 individuals down to around 70 today. Areas of high biological diversity previously damaged by the elk are showing clear signs of recovery, and overall damage claims to private property and infrastructure are down throughout the subunit. Taken together, we’re starting to see elk numbers on the landscape that the local ecosystem can support; the challenge now is sustaining this success over time.