Frogs: The Other Springtime Singers 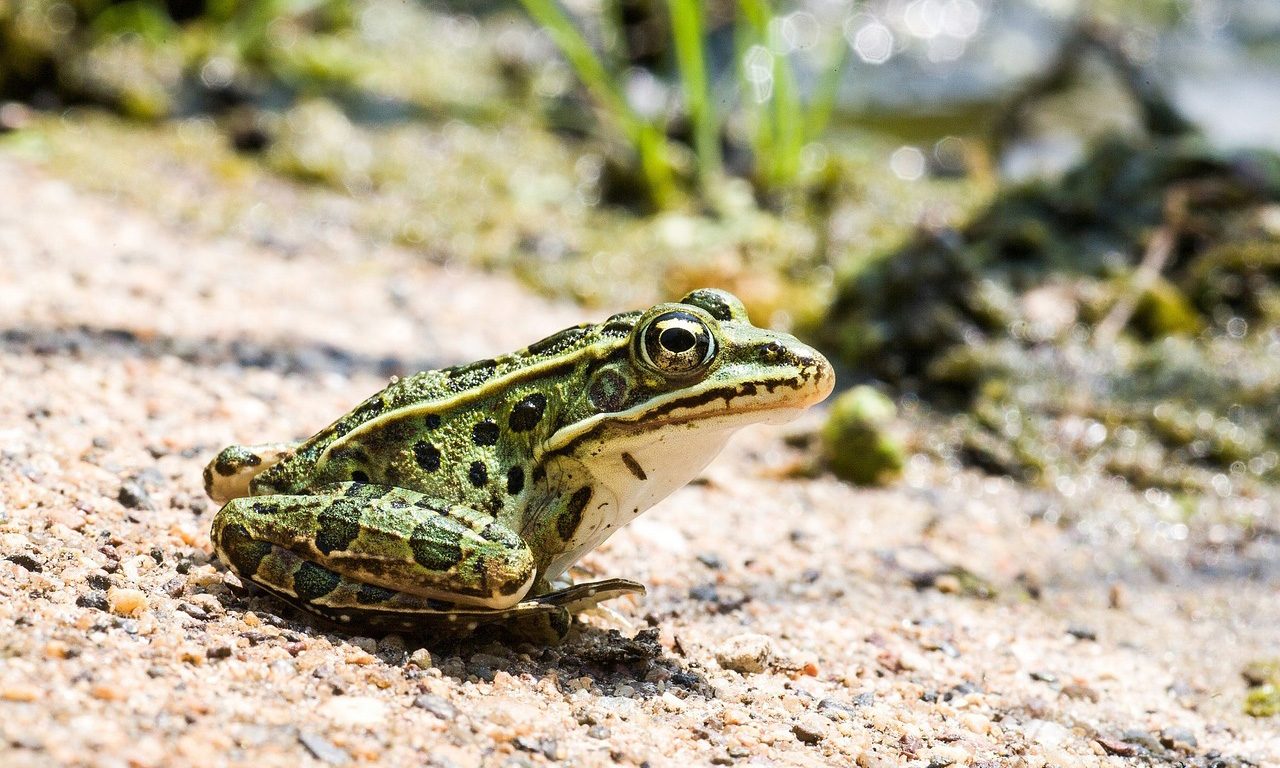 The life zones in Boulder County foster high diversity in wildlife. A spring walk in the evening or a summer walk in the mountains brings a symphony of frog calls as the males congregate in pools to attract the females. This article illustrates the environmental adaptations of two frogs found in Boulder County, the boreal chorus frog and the northern leopard frog. Chorus frogs are less than half the size of the northern leopard frog, which can reach 10 cm, and have quite different skin markings although both can show green to tan coloration that affords great camouflage.

Frog life cycles are remarkable because of the dramatic changes in form between eggs and adult. Egg clutches are larger, 3,000 to 5,000 per clutch for the leopard frog, compared with 300 for the chorus frog. The northern leopard frog wedges the egg mass underwater between vegetation stalks, whereas chorus frogs deposit only thin strands of a few eggs on the underside of leaves or around submerged stems. The gelatinous eggs deposited by the females, once fertilized, develop into the fish-like tadpole that swims through tail undulations. Oxygen in the water is obtained through the tadpole’s gills. The tadpole’s food includes algae that grow in the water. These larvae feed so aggressively that they regulate algal blooms helping maintain water health.

Websites like uOttawa Nature Watch aid in distinguishing frogs by their calls.

A video recording at CaliforniaHerps.com illustrates vocal interactions between male chorus frogs with their metallic clicking calls, as well as the “snoring” call of the northern leopard frog.

Maturation into an adult involves changes in respiration to include both lung activity and exchange of gases through the skin. Skin moisture is important in this process, and the permeability of the skin is also the way the frog takes in water because frogs do not drink. Adult frogs possess modified teeth-like structures to hold rather than chew or tear their prey. The carnivorous adults prefer insects (mosquitos, yum!) along with earthworms, small minnows, and spiders. Food is caught by the sticky extensible tongue and swallowed whole with inward movement of the large eyes physically forcing the prey into the digestive tract. These eyes located high on the head maximize detection of prey and predators with almost 360 degree visibility. A third eyelid protects the eyes providing clear vision as they stay open underwater.

The adult northern leopard frog requires three different habitats to complete its life cycle: shallow water for breeding, deep, aerated water that permits overwintering without freezing, and access to upland with nearby water sources in the summer when travel between 0.3 to 5 kilometers occurs. In contrast, the near-pond site is adequate for the chorus frog throughout its life. Impressively, the chorus frog survives winter by slowing the heart and making antifreeze for its blood to become completely frozen under natural shelters in its pond habitat

In spite of their adaptations, native frog populations are under challenge by the nonnative bullfrogs, which were imported as food and pets, but have spread into the wild. The larger bullfrog adults include smaller native frogs in their diet; even the bullfrog tadpoles out-compete the natives for their food, the algae. Bullfrogs can also have higher immunity to infections that easily spread to more sensitive frog populations.

In Colorado, the decline in the northern leopard frog populations through the varied factors has resulted in its listing as a Tier 1 Species of Greatest Conservation Need by the Colorado Parks and Wildlife. Efforts in Boulder County in the refurbishing of riparian areas impacted by the 2013 flood include landscaping to boost native frog habitat.  For instance, Webster Pond at Pella Crossing is redesigned as a native fish refugia with only small native nongame fish, that won’t prey on Northern leopard frogs or their egg masses. Keeping the balance of nature to include the native frogs in our open space landscape clearly is a challenge, but essential so that their chorus can continue to welcome the return of springtime.