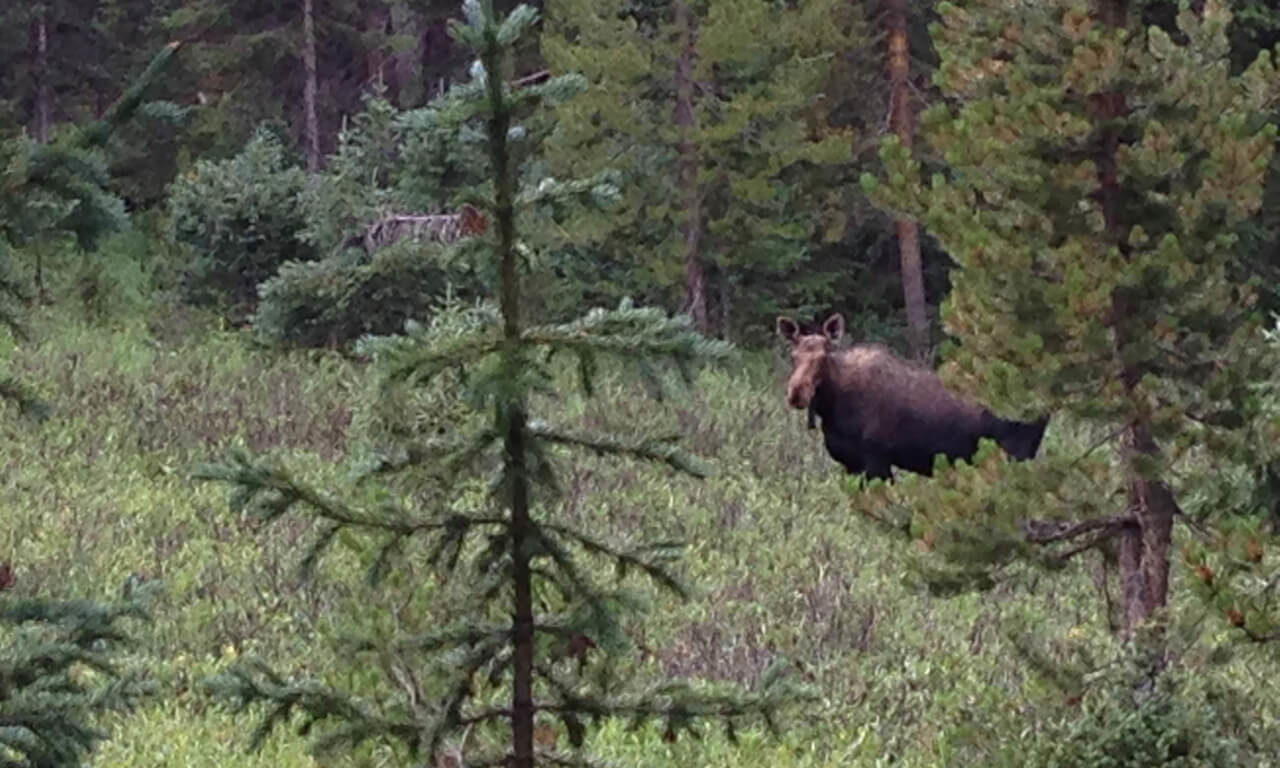 As my husband and I ambled along a hiking trail last summer, two people heading the opposite direction excitedly alerted us that there was a moose a half-mile up. To some, this sighting would be exciting news—a cause to quicken the pace and reach for the camera. I, too, wanted to quicken my pace, but in the opposite direction. Given my fear of, and respect for, moose, I have never desired to see one up close.

But given the report that this moose was quite a ways off the trail, I followed my husband’s lead and ventured forth.

Moose were introduced into Colorado in the 1970s. Just 12 moose were initially released in 1978, and the population has flourished since then, both by the introduction of more moose, as well as by the animals naturally establishing and expanding their habitat.

According to Colorado Parks and Wildlife, Colorado is now home to nearly 3,000 moose, and the moose population is thriving in Boulder County.

Dave Hoerath, a wildlife biologist with Boulder County Parks & Open Space said, “I think moose took off in the county once they got here because we have some very good habitat in the high country: willows and bottoms in the City of Boulder Watershed lands, as well as some of the alpine meadows in the Indian Peaks Wilderness.”

Given our desirable habitat for moose, at which properties might you see them in Boulder County’s open spaces? While moose can be spotted at almost any location in Boulder County, most sightings are at Mud Lake and Caribou Ranch Open Space near Nederland, and they are also regularly reported at the Forestry Sort Yards and Reynolds Ranch.

“I don’t think we have had anyone stomped or chased at Caribou, but the danger is real, especially with moose cows with calves,” said Hoerath. “Luckily Caribou does not permit dogs or bikes—and the vast majority of our hikers stay on-trail.”

Additionally, Hoerath said, “Caribou is closed every year in spring (April thru June) to allow for overwintering elk and moose, and early songbird migration and nesting—a nice quiet period.”

If you are lucky enough to observe a moose from a respectful and safe distance, you’ll first notice their large size. As the largest member of the deer family and the largest wild mammal in Colorado, they range from 800 to 1,000 pounds. A bull (male) moose can grow as large as six-feet tall at the shoulder. Their antlers, as large as five feet across, are called, “palmate,” meaning shaped like the palm of a hand with fingers stretching out.

The large size of a moose might lead one to believe they would be slow, but they can run up to 35 miles per hour.

And what became of our moose sighting? As we hiked on, we came upon a group of people quietly standing and looking through binoculars. The moose was probably 50 yards away, eating grass in a green and misty meadow. I was very glad I hadn’t turned around and missed seeing this beautiful animal going about her day.

With so many moose in the state, you may see one during your outdoor adventures. If you do encounter a moose, keep these tips from Colorado Parks and Wildlife in mind: