White Deer: The Legend and the Science 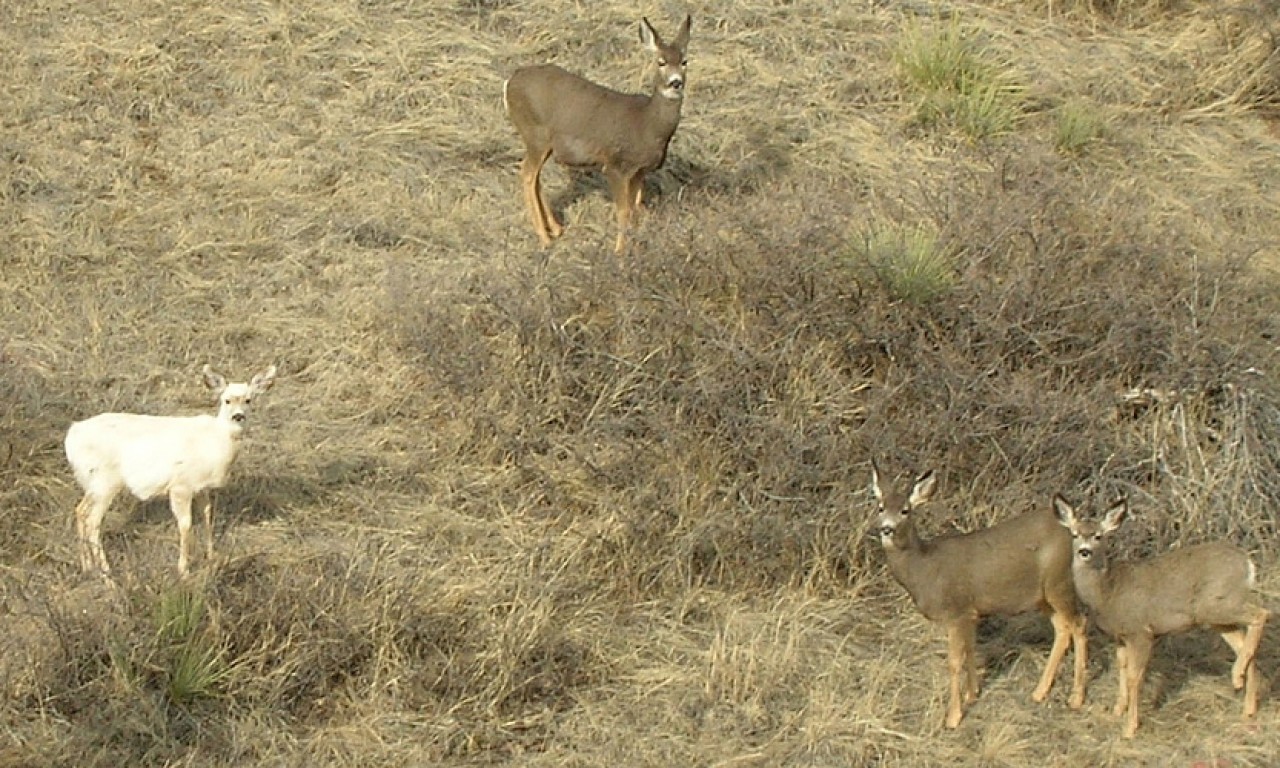 Ponderosa pine trees, juniper, yucca and bitterbrush cover the red, rocky hillsides along the Antelope Trail at Hall Ranch. Red-tailed hawks circle in the sky, spotted towhees chatter in the trees and Nuttall’s cottontails hide in the shade of desert shrubs. A herd of mule deer graze quietly amidst it all. One of these deer draws the attention of passing hikers and bikers as they too, wander through the foothills. This deer stands out. Rare and striking, this deer is white.

White animals are rare in the wild. The occurrence of white fur, skin or plumage in animals depends on individuals having specific mutations in their genes, and this is quite uncommon. An animal’s lack of color can be caused by one of two genetic conditions, making it either albino or leucistic, the latter being much more common.

White, yet not Albino

Albinism, the condition which results in an “albino” animal, is perhaps the most well-known genetic state that renders an animal white. However, true albinos are enormously rare in nature. Unable to produce any melanin pigments in their bodies at all, albino animals are pure white in color, and their eyes are pink or red. Leucistic animals, however, can produce melanin but are unable to deposit it properly in their skin, fur or feathers. Leucistic animals often have patches of color somewhere on their bodies, and the color of their eyes remains dark.

Hall Ranch’s white deer is leucistic with some small bits of brown fur, as well as dark eyes. The resident ranger, Denny Morris, first remembers seeing the deer as a fawn in 2011. He has seen her about four times since then. Visitors to Hall Ranch have a chance of seeing her from early fall through early spring, as the herd she travels with moves higher into the mountains in the heat of the summer.

Some animals, such as polar bears or snowshoe hares, are intentionally white or change to a white coat seasonally, and have the advantage of being camouflaged in snowy environments. Many leucistic animals, however, do not live in such habitats and, they no longer have the coloration that allows them to camouflage themselves for safety in their homes. For this reason, leucistic animals are often caught as prey or hunted down by humans far before they reach the end of their potential natural lifespan.

Female mule deer generally do not live beyond 14 years. The white deer of Hall Ranch is already three to four years old. If she is to live out the next 10 years of her life she will have to successfully avoid the area’s mountain lions that rely on mule deer as one of their primary food sources. Luckily for the deer, she lives through winters and the corresponding hunting seasons on an open space property where hunting is prohibited.

Lore of the White Deer

Not only unusual to see in the wild, this animal also serves as a reminder of a rich history of legend and myth associated with white deer. In European and Celtic mythology white deer are believed to be supernatural, and the Arthurian legends include a magical white stag. Native American tribes, including the Chickasaw and Lenape, have stories and prophesies associated with white deer and seeing them in the wild. Given the rarity of these animals, it is no wonder that we respond to them with a sense of awe.

Does the presence of this deer at Hall Ranch signify anything special or powerful about the landscape? Each person should answer that question for themselves. Yet it is also curious that within the last 10 years a “white” red-tailed hawk nested in the same area. Perhaps there is something extra in the air at Hall Ranch, and not just different genes.