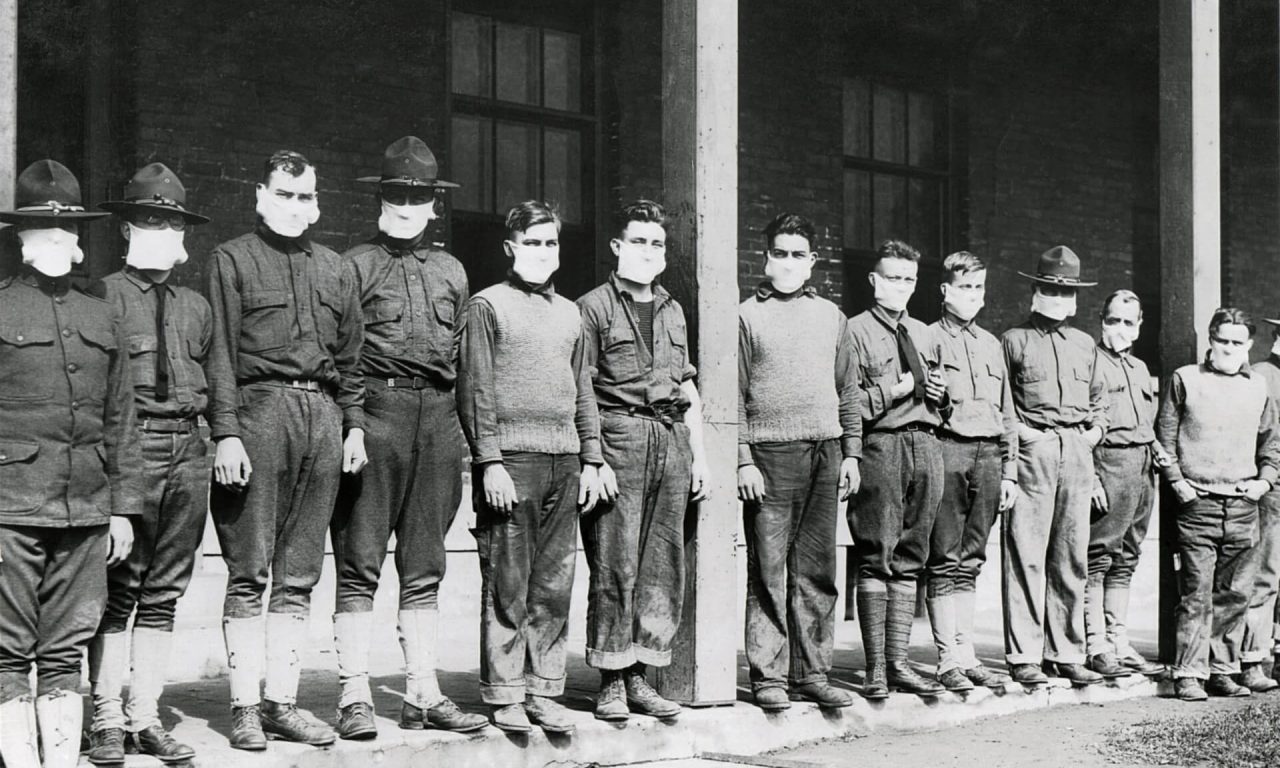 2018 marks the 100th anniversary of the deadly influenza pandemic. A pandemic occurs when a new, deadly virus that the immune system has not encountered before spreads around the world. This influenza virus infected over 500 million people worldwide, killing between 50 and 100 million.

March 4, 1918 at Camp Fuston, Ft. Riley, Kansas began like any other day until the first soldier reported flu-like symptoms and was admitted to sick bay. Within two weeks over 1,100 men at Camp Fuston were hospitalized with thousands more sick in the barracks. The first wave of the 1918 Influenza Pandemic had begun.

American soldiers were being trained to fight as World War I continued to rage in Europe. It is likely that soldiers infected with the flu virus from Camp Fuston were transferred to other camps, spreading the disease. Modern transportation systems also hastened the outbreak. Infected soldiers and sailors traveled throughout the United States by rail and on to Europe amid crowded ships. They were housed in the close quarters of military camps further spreading the influenza. Not only did the allied countries receive help from the United States with the war effort, they got influenza! With the first wave, many were infected, but few died. Soldiers called it the “Three Day Fever.”

The second wave of flu arrived in the summer of 1918 and was incredibly deadly. During August 1918, influenza killed 400,000 Americans. This influenza had become a true pandemic, attacking people as far away as Tahiti and India, and even the Arctic. Ten to 20 percent of those infected died. The virus affected not only the upper respiratory system but also went deep into the lungs, often leading to pneumonia. Surprisingly, this flu attacked those in the prime of life instead of targeting the very young and old. Young adults ages 21 to 29 were especially vulnerable. More American soldiers died as a result of the flu than by the war.

It Came to Colorado

Colorado was not immune to the virus. Denver officials encouraged the use of face masks. Schools, theaters, churches, and other community events were closed or canceled. Officials urged that the ill be quarantined so that sick room visitors would not spread the virus. People who had come to Colorado for the dry healing climate with respiratory ailments and miners with weakened lungs were especially at risk. Immigrant neighborhoods in Denver were hard hit. Over 3,000 Native Americans died in the Four Corners region of southern Colorado.

Some say that this influenza was no more virulent than other strains of flu, but felt that special circumstances accounted for the huge number of fatalities. It is true that in the United States, many doctors and nurses were serving in the military, leaving overcrowded hospitals understaffed and unable to cope with the huge numbers of ill people. With little professional care, malnourishment of patients was common. As the disease spread across the U.S. so did fear. People were reluctant to care for sick friends and relatives, fearful that they too would come down with the disease.

Toward the end of 1918, the third wave of influenza began. Much to the relief of all, this was a milder form of the disease and passed quickly. The deadly Influenza Pandemic of 1918-19 killed between 500,000 and 650,000 Americans. The epidemic lasted 15 horrific months, and then receded as quickly as it had come.