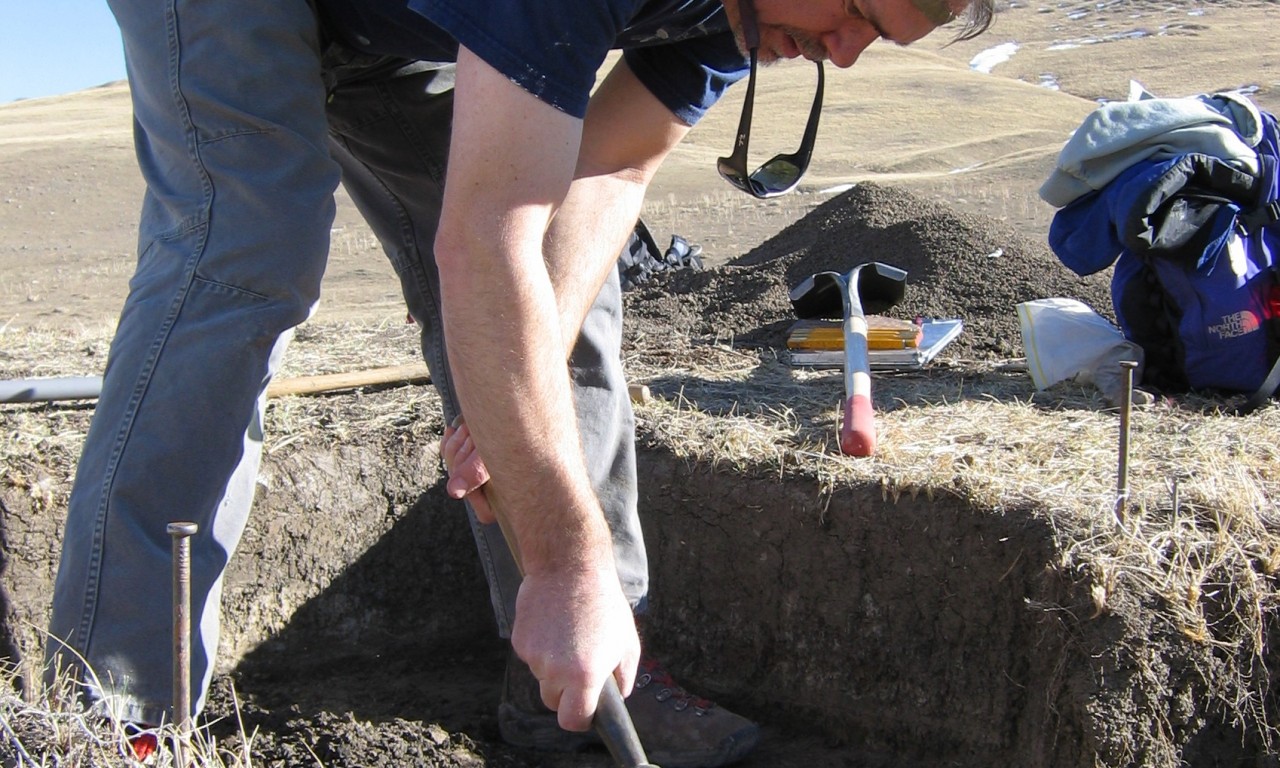 After a series of transactions between 1993 and 1995, Boulder County purchased the Zaharias-Thomas property located along the south county line (Hwy 128), west of McCaslin Boulevard. The 366-acre property consists of gently rolling plains, native grasses, intermittent drainages, and a section of Rock Creek that crosses a portion of the property. The property is under an agricultural lease for livestock grazing and therefore closed to the public.

In 2008, Boulder County Parks and Open Space staff discovered a prehistoric hearth eroding out of the creek bank during a field visit for a proposed Urban Drainage and Flood Control District project along Rock Creek. As good stewards of its cultural resources, and following the Boulder County Comprehensive Plan that “every effort shall be made to identify and protect prehistoric and historic sites which meet national, state and local criteria for historic designation from destruction or harmful action,” staff moved into action to identify, evaluate, and protect the prehistoric site.

An archaeological survey, testing, and excavation in 2009 and 2010 located cultural materials including stone and bone artifacts, and plant and animal remains. No ceramics were found. Archaeologists identified this site as a specialized game-processing location where early inhabitants processed the meat of large and medium-sized mammals which were later transported to a main base camp located elsewhere.

Inhabitants at the Zaharias site processed bison, elk, deer and pronghorn. They butchered larger game and cracked the bones to extract marrow, an important source of fat for hunter-gatherer groups during times of stress. Modified animal bone tools found at the site include an awl fabricated from a deer foot bone, a split rib tool fragment, a polished flat bone fragment, and a bone bead debris fragment.

The site also consists of small quantities of ground and flaked stone including two projectile points, a chopper or core tool, and an anvil. The formal tools consist of a triangular corner-notched projectile point made of clear quartz, and a second similar projectile point base of Dawson Petrified Wood. A stream bed cobble from Rock Creek formed a large chopper or core tool. Fire-cracked rock found with the remains of hearths were probably used in the cooking process as heating rocks for roasting meat or rendering bone grease.

Radiocarbon tests date the Zaharias site’s occupation at multiple times beginning with the Early Ceramic Period, AD 650, and continuing to around AD 1150. During the site’s earlier years of occupation, the inhabitants focused on processing medium-sized mammals like deer and elk, while later, the focus shifted to bison. Archaeologists suggest that site inhabitants relied on low quality tool-making materials and on intensive processing of their limited food resources, possibly because they were under pressure from increasing population numbers and decreasing resources during the Early Ceramic period.

In 2009, the Office of Archaeology and Historic Preservation determined the Zaharias site officially eligible for the National Register of Historic Places. Urban Drainage and Flood Control District completed their channel realignment project that same year avoiding any adverse effect to the Zaharias site by stabilizing and covering the site with soil in order to allow for the possibility of future archaeology projects.