Victory Gardens, Then and Now 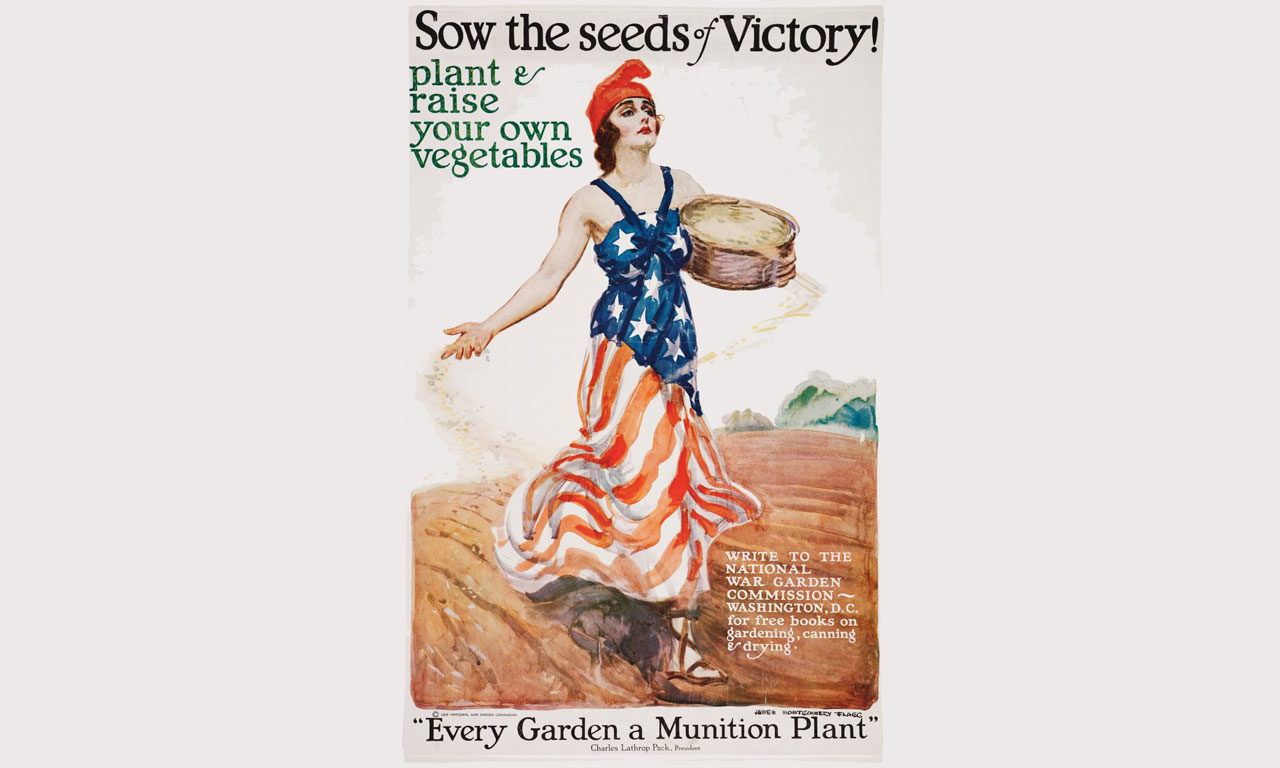 When you think of victory gardens, does the image of patriotic posters from World War II spring to mind? The history of victory gardens stretches back to World War I when America became embroiled in a war that took our young farmers from the fields to the front lines. Citizens across the country were encouraged to grow their own food as a means of easing shortages and providing exercise.

After the United States entered WW I on April 16, 1917, several factors caused shortages in food and fuel supplies: young men had left the farm to fight in the war, canned food, grain, and seed for crops were shipped to war-torn European ally nations, and supply chains were interrupted because of labor shortages.

Immediately, national and local defense councils encouraged people to contribute to the war effort by saving or growing food. Charles Lathrop Pack organized the National War Garden Commission to encourage Americans to contribute by planting, harvesting, and storing their own fruits and vegetables to allow more food to be sent to our allies.

Coloradans did not face rationing as extensively as they would in WW II, but they faced rising food and fuel prices and limited supplies of food and other essentials. As a result, Colorado citizens joined the nation by tightening their belts and planting war gardens.

When the armistice in 1918 ended the war, Americans were encouraged to continue their gardening by the National War Garden Commission. Calling the effort “liberty gardens,” the federal government touted these gardens in a national campaign as a way that citizens could contribute to America’s return to prosperity. Nationally, three million gardens were planted in 1917. By the end of 1918, more than five million gardens were being cultivated.

The White House Sets An Example

Interest in liberty gardens waned a few years later, but was revived during WW II when food supplies were again strained and more extensive rationing was in place. In 1943, Eleanor Roosevelt planted a victory garden on the front lawn of the White House despite the objections of the U.S. Department of Agriculture which was concerned about the message it sent to farmers. Though largely symbolic, the victory garden on the White House lawn was the First Lady’s call to action for the national movement for home-grown food to help alleviate shortages.

The victory garden movement in WW II was successful, with more than 20 million Americans producing approximately 40 percent of our country’s produce. The City of Denver established a Victory Garden Office and in March 1943, Mayor Stapleton dedicated Denver’s first victory garden in what is now Congress Park.

Today, Americans once again face the possibility of food supply interruptions and Coloradans are planting vegetable gardens for exercise, mental well-being, and food to share with family and friends. Colorado State University Extension has helped the people of Colorado grow food in tough times, from WW I to WW II, and we are here for you now.

Master Gardeners are here to answer your questions during live online chats on Fridays, Saturdays, and Sundays from 10 a.m.-2 p.m. through Sunday, June 14 .

Or you can email questions and photos to our help desk at mggpa@bouldercounty.org.

Check out Grow & Give, our website packed with information and instructional videos for planting your vegetable garden, plus details for how to enroll in the online Vegetable Gardening course.