Watch Out For These Weeds 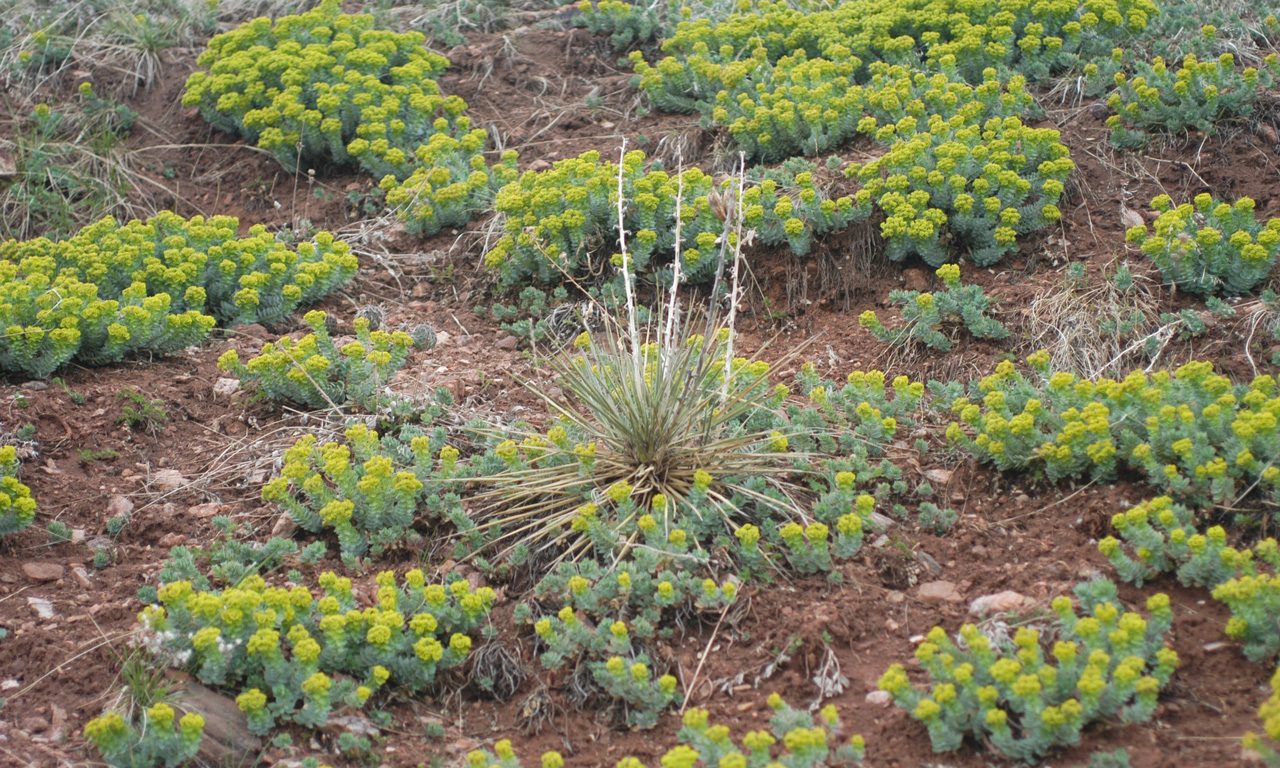 It’s fall, and the weeds are on the move. Scotch thistle flowers transform into starry masses of windborne seeds—up to 14,000 per plant fly from as high as 12 feet above the ground. Diffuse knapweed, a tangle of white flowers and prickles, forms tumbleweeds, rolling across the landscape spreading seeds along the way. When myrtle spurge seeds ripen, they are launched from plump capsules, landing yards away, trying to start a new patch of the toxic perennial. Whatever the method, the spread of noxious weeds like these presents a serious problem to native plants, wildlife, livestock, and cropland.

What Is A Noxious Weed?

A weed is a plant in a place we don’t want. Many weeds are disturbance-adapted, taking advantage of openings when vegetation is cleared, like chicory on roadsides or bindweed between garden rows. Our invasive weeds often come from other continents. Some arrived accidentally, in feed or packing material; others were intentionally planted for use or beauty. Once here, they are released from their co-evolved controls, diseases and hungry mammals and insects, potentially growing unchecked.

A noxious weed is a non-native plant causing economic or environmental harm that has been given a legal designation requiring action. The State of Colorado sorts its official noxious weeds into three lists to prioritize weed-fighting efforts.

All noxious weeds are illegal to sell at nurseries. The species on these lists can be poisonous to livestock and wildlife, like houndstongue, or aggressively invasive, forming dense stands that displace native plants, like common teasel in wetlands.

Luckily, Boulder County Parks & Open Space (BCPOS) has a team of experts working to control our weeds to meet the requirements of noxious weed laws on open space and county roadsides. Weeds don’t care who owns the land, and they are good at hopping barbed wire, so our professionals also work with private landowners and other agencies to control infestations across the county.

What Are We Doing About Weeds?

The department’s approach to weeds aims to integrate the most ecologically sound, safe, effective, and economically feasible methods. Reducing the load of harmful weeds on the landscape requires deep knowledge of each plant’s biology—understanding the longevity of the soil seed bank, propagation and dispersal mechanisms, and intervening at just the right moment in the life cycle for maximum effect. We also have to know the land. The weed team scours the county with GPS units to make detailed maps of which weeds grow where. The big problem of invasive species requires a big toolkit.

The most familiar methods for controlling weeds, to home gardener and county crew alike, are mechanical, such as mowing plants down or pulling them up by the roots. All paved county roads get their edges mowed about three times a year to keep visibility up and fire risk down, but this is also a key part of weed management. Weeds love roadsides. They are sunny, disturbed areas that collect rain runoff. Roads also serve as corridors for weeds to spread. Mowing favors native perennial grasses over broad-leaved weeds, and schedules are set to mow specific patches before they set seed. Within a careful plan, prescribed burns can also reduce weed populations.

Herbicides are another way to reduce noxious weed populations but require balancing the value of these tools against their environmental risks in several ways. Crews keep tabs on sensitive species of plants and animals to set protected zones. Minimum effective amounts are always used. Large-scale spraying is only used where infestations are larger than an acre. Otherwise, chemicals are applied by hand-spraying individual stands of weeds. Our team keeps up with the latest science on herbicide safety and specificity, reevaluating approaches yearly.

Another method that requires careful environmental consideration is biological control, which is the release of insects to combat weeds lacking the natural controls of their native habitat. For example, a stem-boring weevil has been released to combat Dalmatian toadflax, with promising results. Though some are already established, the county no longer releases the seed head feeding weevils that target thistles because we have native thistles that are also susceptible. Specificity for target species is critical in controlling these interactions.

One of the best approaches to tackling weeds is prevention. Our native plant and weeds experts work together to maintain healthy plant communities across county open space properties, which discourages the spread of weeds, especially after major disturbances like flood or fire, or smaller ones like herbicide application or trail construction. By planting native species, we can prevent the invasion of more weeds.

What You Can Do To Help

Our plant experts do not advocate vigilante weeding on county open space properties, in part because some noxious species have native look-alikes, including thistles, cinquefoils, and willowherbs. However, there are many other ways to help. This summer, we installed boot brushes at several trailheads to encourage park visitors to remove weed seeds from shoes before and after a visit. Volunteers contribute significantly to weed mitigation, from hand weeding sessions to collecting native seed for restoration. At home, you can help fight the spread of noxious weeds by learning to recognize them and keeping your own yards and sidewalks clear of weeds. This time of year, that means trying to catch them before they release seed. Boulder County and the Colorado Department of Agriculture maintain websites with lots of information about noxious weeds, including identification guides, and the CSU Extension program provides support for landowners and educational opportunities for anyone ready to go deeper into the weeds.