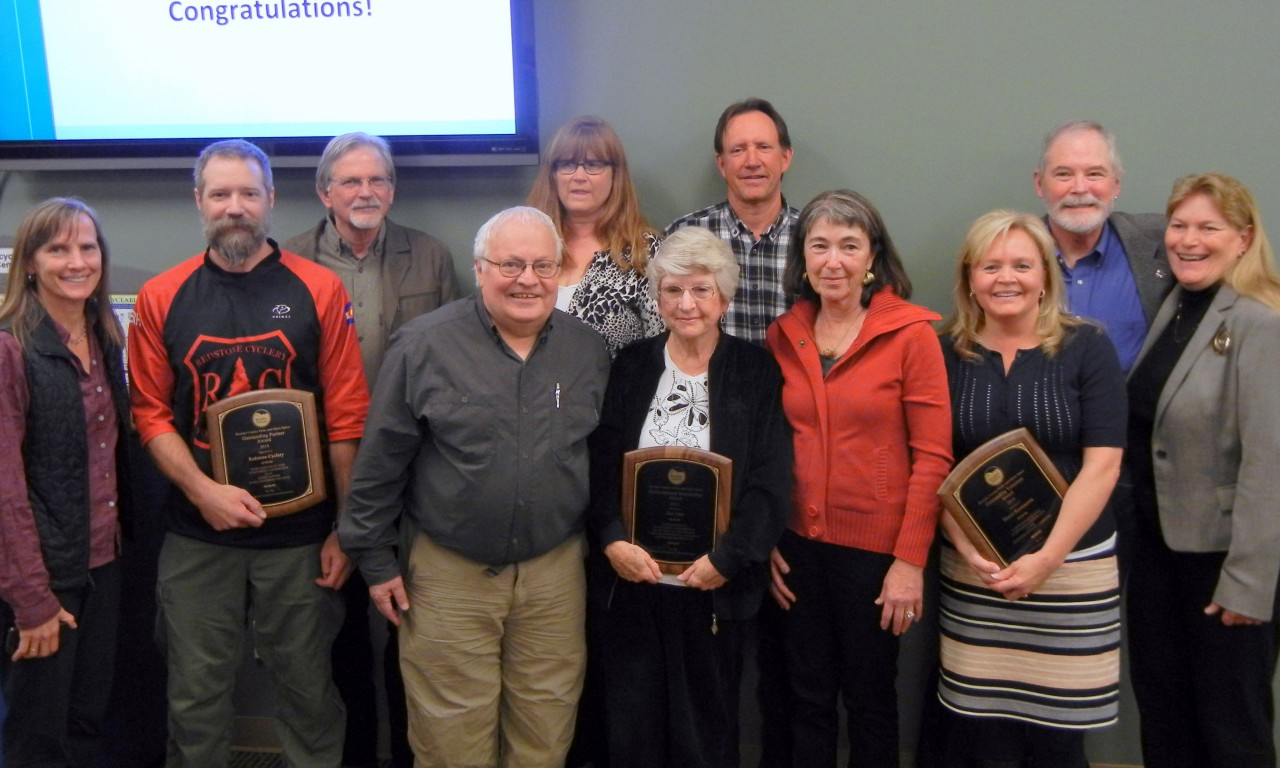 The Land Conservation Award honors individuals, families, and organizations whose contributions demonstrate notable achievements in preserving Boulder County’s agricultural lands. Founded in 1959, PLAN-Boulder County has been one of the leading citizens’ organizations working to ensure environmental sustainability in the city and county of Boulder. PLAN-Boulder County members have advocated for growth controls, comprehensive planning, flood plain regulations, and regional bike trails. PLAN-Boulder advocated for the county open space program, and members were among those first appointed to the Parks and Open Space Advisory Committee to help formulate a plan for preserving open space throughout Boulder County. It was fitting that on the occasion of the department’s 40th Anniversary, the department would honor PLAN-Boulder County for its vision and continuing leadership promoting the stewardship of Boulder County and preserving its quality of life for all of its inhabitants.

The Heritage Award honors individuals or organizations whose contributions demonstrate notable achievements in preserving Boulder County’s heritage through privately funded historic preservation projects. Boulder County acquired the Swanson property in 2001. Over the following 13 years, the barn suffered from frequent vandalism and the effects of Mother Nature. Without a viable use for the barn, the department offered the barn to anyone willing to move the barn and restore it. Rob Alexander purchased and relocated this barn to preserve the historic structure. Alexander faced many challenges. Costs included expensive county-required commercial insurance, moving utility lines out of the way during the move, Land Use permit fees, and constructing a new custom foundation at the barn’s new location. The 2013 Flood caused a one-year delay, but finally on December 19, 2014, the Swanson Barn was moved and looks like it always belonged on Rob Alexander’s land.

The Partnership Award recognizes alliances with businesses and organizations around the county to foster a community-based stewardship ethic for the preservation and care of open space. Redstone Cyclery has been a partner since 2008 and has maintained over 4,050 feet of existing trail and helped construct 27 grade reversals and drainages. Most of their events took place on Tuesday evenings when members usually met at the Lyons bike shop and rode up to the work site. Redstone has shown their dedication to the department with their willingness to take on these projects far beyond the trailheadalways going above and beyond the amount of work we believe can get done.

The Outstanding Volunteer Awards honor individuals whose leadership and support of the Parks and Open Space volunteer programs have enhanced our community partnerships and improved public service. This year, there were three
recipients.

Todd Van Dyke has volunteered as a raptor nest monitor at Rabbit Mountain for over 20 years. Van Dyke became a volunteer for the Raptor Nest Monitor program in the 1990s when he established the Friends of Rabbit Mountain group helping the county secure and protect the top of the mountain with open space purchases in 1993 and 1994. Van Dyke provided consistent, meticulous, and thorough documentation. Through his long-term commitment, he has helped the department understand the relationship between enduring places and how the department manages them.

Sherrie Rasmussen has been on the Extension Advisory Committee for 14 years. She has been involved in 4-H since 1998. Sherrie was a 4-H leader for three years and served on the Boulder County 4-H Council. She is a strong supporter of agriculture in the county by both farming and working for the Farm Service Agency. Sherrie has also been involved in the Colorado water industry through her work at Northern Colorado Water Conservancy District.