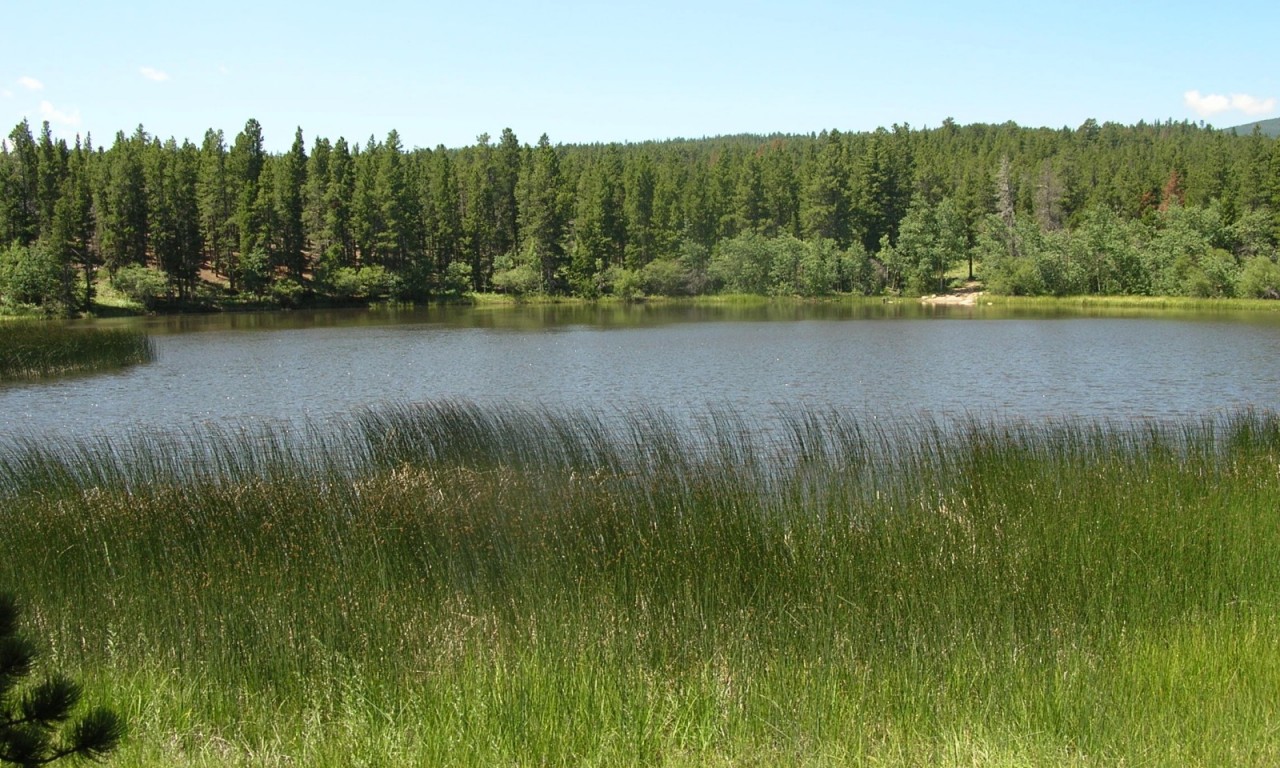 In the shadow of the Continental Divide, where mountain winds blow cool and crisp, lies Mud Lake Open Space. The property’s trails offer a place to enjoy montane tranquility and escape the chaos of the modern world. Yet despite its peaceful qualities, Mud Lake was once heavily impacted by human use. Today the names of the park’s trails, Tungsten and Kinnickinnick, serve as reminders of the area’s destructive mining industry but also of a resilient plant and nature’s ability to heal.

The most obvious remnant of human impacts is Mud Lake itself. The waters of the lake are held within a 440-foot-wide circular depression. Curiously, this depression is located on a relatively high piece of land rising above two streams. This unusual location for a lake led to speculation in 1999 that the depression was a meteorite impact crater. Two years later the Town of Nederland and the Colorado Geological Survey examined the geology beneath the lake and found no evidence to support the meteorite impact theory. However, they did find irregular piles of rock fragments at the bottom of the lake which are believed to be submerged mine tailings. The most credible explanation is that the lake is of human origin with a tie to the extractive mining industry.

This mining industry played a critical role in the cultural history of the Mud Lake and Nederland areas beginning back in 1869. Silver was discovered nearby at Caribou in that year, and many prospectors and miners, including a man named Samuel Conger, flocked to the area. It was not long though, until the focus of hard-rock mining shifted to a new ore, tungsten. From Swedish meaning “heavy stone,” tungsten was found in abundance near Mud Lake. This so-called “black iron” became the life blood of the region. The Conger Mine, just west of Mud Lake, became one of the largest producers of tungsten in the world in the early 1900s.

Used as an additive to harden steel, world demand for the ore skyrocketed with the outbreak of World War I, and by 1916 Nederland was in its peak as a tungsten boomtown. In the years from 1906 to 1916 the price of tungsten ore increased over  2,000 percent. But as the prices soared over a short period of time, the industry plummeted just as quickly. The spread of the great influenza epidemic in 1917 hit Nederland particularly hard and brought mining to a standstill. Mines closed and fell into disrepair. Today the Tungsten Loop trail reminds us of the ore that once made this place known around the globe.

With the end of mining and transition of Mud Lake to an open space property, humans have lightened their pressures on the land. Plants and animals are reclaiming this portion of the earth, and the vibrancy and colors of a montane forest are returning. Beneath the shade of lodgepole pines the soil is adorned by the abundant shrub kinnikinnick for which Mud Lake’s other loop trail is named.

Kinnikinnick, or bear berry, is a creeping shrub (in the manzanita genus) that grows between 6,000 and 11,700 feet in Colorado. It often serves as the dominant understory plant in lodgepole pine forests, like those at Mud Lake. The rocky soils, along with the impacts of mining at Mud Lake, make it prime habitat for this shrub.

In spring, the shrub’s glossy evergreen leaves become accompanied by small flowers which eventually develop into deep red berries. Though rather woody and tasteless, the berries are eaten by a variety of songbirds, grouse, wild turkeys, deer, elk and small mammals, as well as by black bears. Humans usually shy away from use of the berries as food except in case of emergencies. What has appealed to people most about the plant are the leaves. These have long been used as a substitute for tobacco. In years past, it was not uncommon to combine the leaves with other plant materials to make a mixture for smoking. In fact, the name “kinnikinnick” is derived from the word for “mixture” in Unami, an Algonquian language.

Kinnikinnick is a reminder of the link between humans and the lands we live upon. It moves in where we have disturbed the soil. Once the plant is established, we take from the plant for our use. Everything in the natural world is linked together and humans are included in that chain. As you walk the trails at Mud Lake, let the names of the paths remind you of your tie to the earth—mining, plants, regeneration, time, and us.