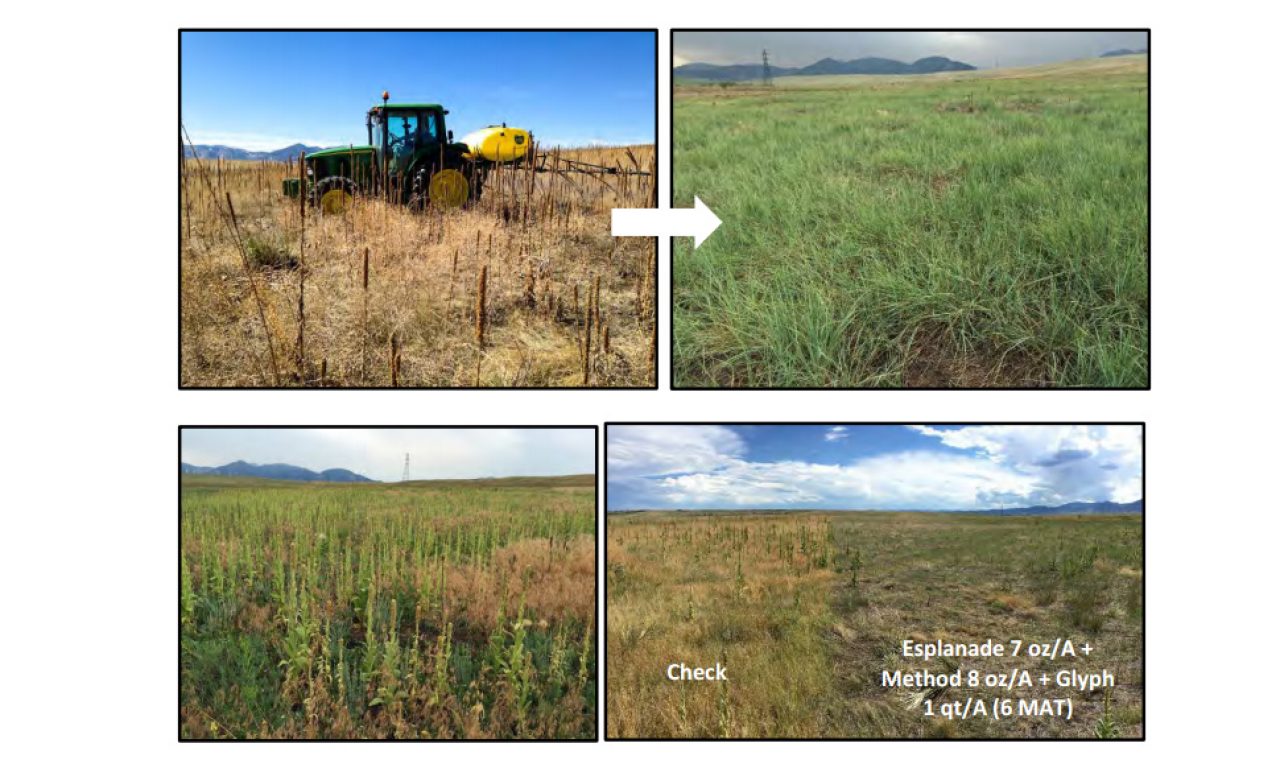 The Boulder County Parks and Open Space Department offers grants for research on county open space lands each year. All proposals are reviewed by a team of resource specialists, and awarded research projects are monitored during their activities on open space. The following is a summary of a 2016 study conducted by Colorado State University Ph.D. student Derek Sebastian. His project focused on extending the duration of annual, biennial, and perennial weed control with esplanade tank mixes.

Invasive species management on non-crop and rangeland remains a constant challenge throughout many regions of the United States. While there are over 300 rangeland weeds, downy brome (Bromus tectorum L.), Dalmatian toadflax (Linaria dalmatica), musk thistle (Carduus nutans), Scotch thistle (Onopordum acanthium), diffuse knapweed (Centaurea diffusa), and moth mullein (Verbascum blattaria) have emerged as some of the most invasive and problematic on Boulder County Open Space properties.

Downy brome (Bromus tectorum L.) is a competitive winter annual grass that is considered one of the most problematic invasive species in rangeland. It has been estimated the western United States rangeland is infested with over 22 million hectares of downy brome. While glyphosate, imazapic, and rimsulfuron are the current industry standards for annual grass control, all of these restoration options provide inconsistent control or cause injury to desirable perennial species. In addition, Dalmatian toadflax, musk thistle, moth mullein, and diffuse knapweed infest over 2.8 million ha alone, and are all Colorado Noxious Weed List B species. The increasing spread of biennial species is a result of their adaptability, life cycle, and prolific seed production.

Weeds compete for moisture and can spread by seed or vegetatively into undisturbed areas, outcompeting native grass, forb and shrub species. Herbicides with both foliar and soil-residual activity (2,4-D, aminocyclopyrachlor, aminopyralid, chlorsulfuron, clopyralid, dicamba, fluroxypyr, picloram, and triclopyr) are most commonly used, yet these control options lack residual seedling control resulting in rapid re-invasions. An experiment is proposed to evaluate the efficacy of indaziflam, a new herbicide that has the potential to extend the duration of annual, biennial, and perennial invasive weed control by eliminating re-establishment from the soil seed bank. Our proposed experiment will evaluate the efficacy of currently recommended herbicides alone and in combination with indaziflam. Research at Colorado State University has shown that treatments including indaziflam resulted in significantly longer downy brome (88-94%) and Dalmation toadflax control (84-91%) four years after treatment.

Cover and control of weed species and desirable perennial grass cover evaluations will be collected after treatments are applied. All data will be analyzed in SAS by analysis of variance and by regression, to determine optimum treatments. This research could ultimately provide a new, long-term control option for controlling noxious weed species on Boulder County Parks and Open Space properties. Educational opportunities, including field tours will be made available to Boulder County Parks and Open Space employees during completion of the experiment.