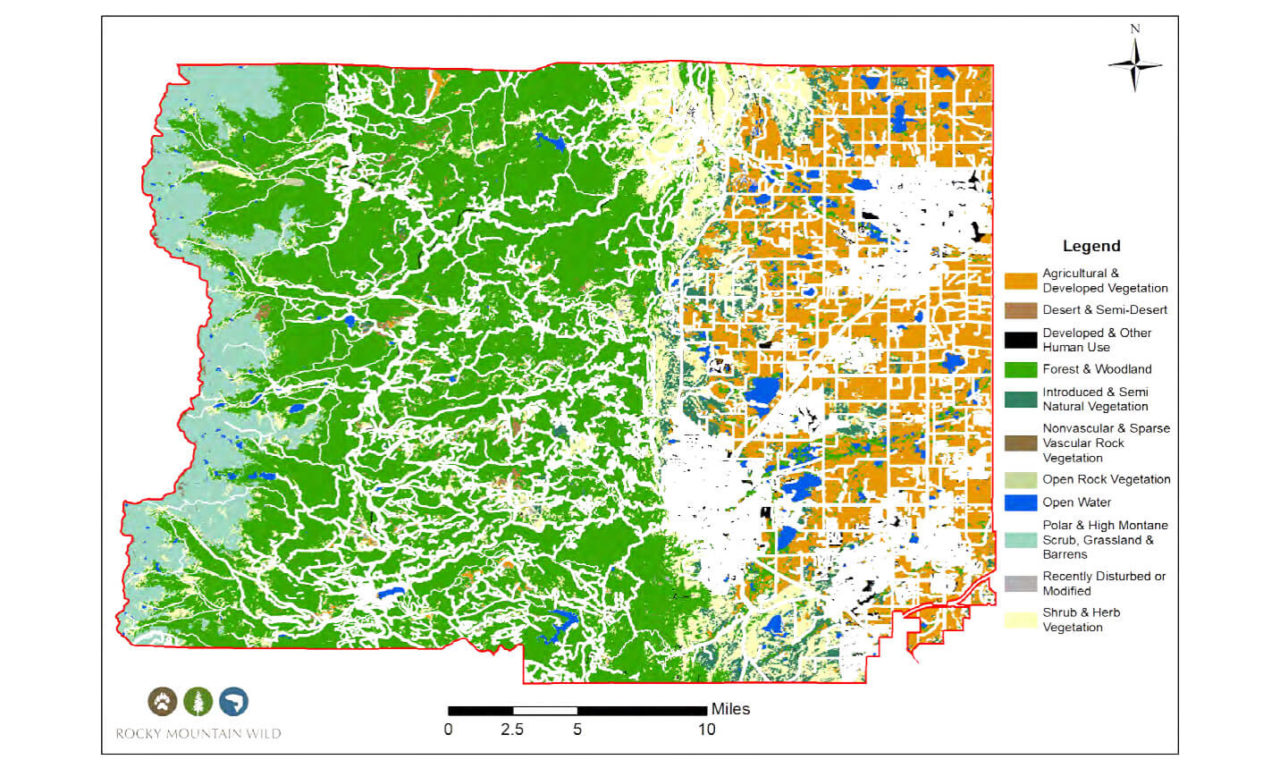 The Boulder County Parks & Open Space Department offers grants for research on county open space lands each year. All proposals are reviewed by a team of resource specialists, and awarded research projects are monitored during their activities on open space.

The following is a summary of a 2018 study conducted by Paul Millhouser and Paige Singer of Rocky Mountain Wild. Their project focused on habitat fragmentation analysis of Boulder County.

Over the last twenty years, research on the effects of human changes to the landscape has increasingly emphasized the impacts of habitat fragmentation on the continued viability of wildlife populations. Development, in the form of roads, trails, and other infrastructure, can have negative effects on habitat suitability and wildlife more generally. Impacts include changes in wildlife behavior and activity due to an increase in human presence; negative effects on species abundance; loss of habitat and spread of invasive species; increased forms of pollution, including noise and light; species’ loss of access to crucial habitat and resources due to road and human avoidance; decreased population viability; increased potential for human-wildlife conflicts; and direct wildlife mortality. See, for example, Benítez-López et al. 2010; Bennett et al. 2011; Gelbard and Belnap 2003; Jaeger et al. 2005; Jones et al. 2015; Mortensen et al. 2009; Trombulak et al. 2000.

It is core to Boulder County Parks & Open Space’s (BCPOS) mission and goals to balance resource management and conservation with meeting the needs of the public. Yet, with more and more people coming to Colorado and settling on the Front Range, those in charge of managing our public lands are feeling an ever increasing pressure to accommodate the needs of wildlife while at the same time ensuring satisfactory experiences for the recreating public. Thus, effective planning for parks and open spaces must balance the needs for recreation and wildlife conservation, informed by accurate knowledge of the increased pressure on wildlife by habitat fragmentation caused by infrastructure development and recreation.

This report outlines our efforts to increase the understanding of the effect of human-caused change, including roads, trails and other infrastructure, on wildlife habitat in Boulder County by conducting an assessment of habitat fragmentation. Through this research, we have identified areas of quality and connected wildlife habitat in Boulder County and are providing BCPOS staff with a tool to inform future planning efforts that will balance the needs of conservation and recreation in the County.

With an ever-growing population along the Front Range in Colorado, BCPOS faces an increasingly difficult task in meeting the needs of nature and wildlife while also ensuring the public has the best possible experience while enjoying BCPOS lands. Through this research, we have provided the staff of BCPOS with a snapshot of the current state of fragmentation in Boulder County, as well as where less fragmented areas and connected wildlife habitat currently exists in the County. Most importantly, we have developed a tool that will allow staff to update this analysis as new data and information become available over time. This will help with future planning decisions, giving them the knowledge they need to make the most informed decisions possible, allowing them to balance the needs of conservation and recreation in the County as best as possible.

We strongly encourage you to contact appropriate staff members to discuss research topics in advance of the deadline. Research proposal requirements, priority research topics, and past research project reports can be found on Research on Open Space page.

Below are four of 14 topics identified by staff as priority needs for natural resource and visitor management. This list is not exhaustive, and we encourage you to submit research topics that are not listed.