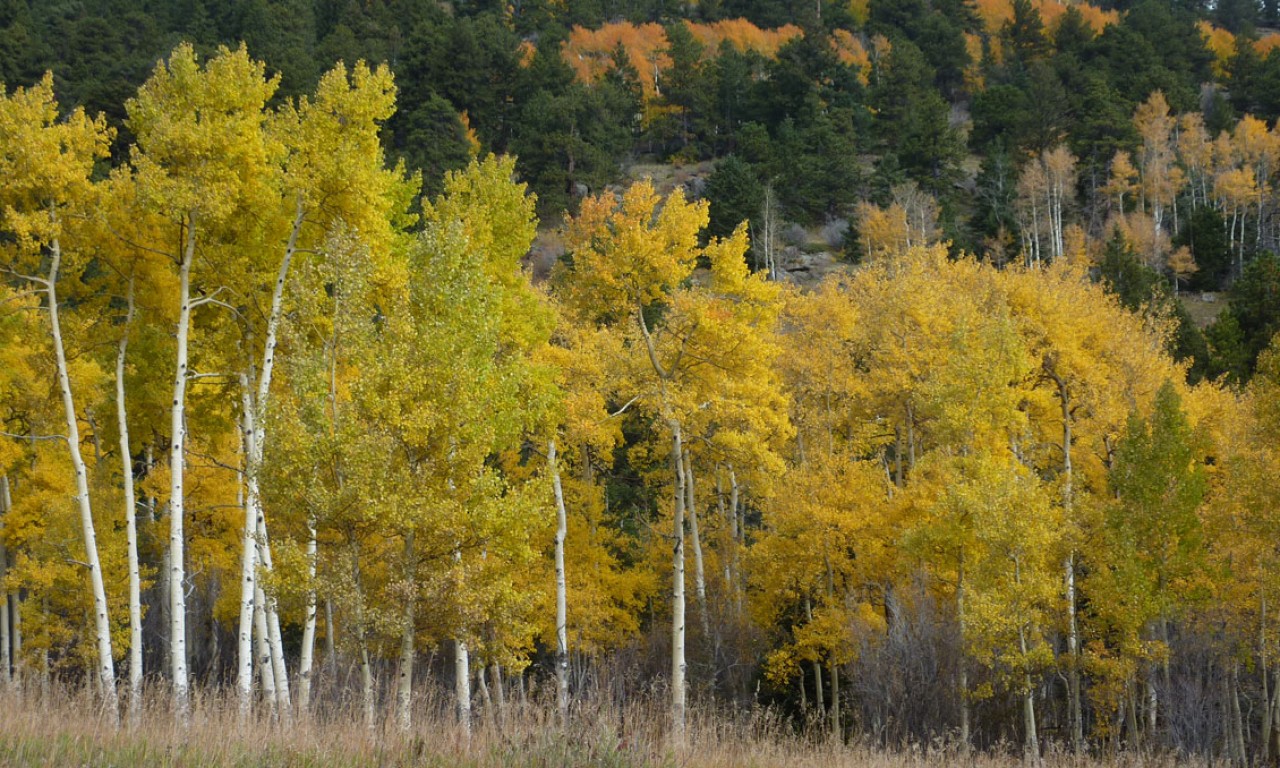 That first morning you awaken to a cool nip in the air. That first aspen leaf tinged gold on the tip. Geese flying south in formation across a clear blue sky. A dusting of snow sprinkled atop Longs Peak. These are all signs that fall is in the air, and winter is coming soon. Autumn in Boulder County is a time of transition and a time of preparation. All of the natural world around us is changinggetting ready for the harshness of winter.

When you think of autumn in the Rockies, the image that comes to mind is the vivid gold and orange hues of the aspen sprinkled along the foothills. It seems entire groves reach peak color all at the same time, which is no coincidence. Aspen have the unique ability to propagate by sprouting or cloning new trees, so that one parent tree can send out hundreds of sucker trees, spanning several acres.
Because they all share the same DNA, the entire grove will reach peak color at the same time. But what causes the trees to turn such brilliant shades of gold and orange?

Chlorophyll is constantly produced in a tree while it is growing during spring and summer months, making the leaves green. But underneath the chlorophyll are the oranges, yellows and reds of carotenoids. In fall, the shorter days of sunlight cause the chlorophyll to eventually stop producing, unmasking the yellows, reds, and oranges we associate with fall foliage. What makes for the perfect peak colors of fall? Ideally, a succession of warm, sunny days interspersed with crisp, cool (not sub-freezing) nights brings out the most intense colors.

“Fall has always been my favorite season. The time when everything bursts with its last beauty, as if nature had been saving up all year for the grand finale.”
Lauren DiStefano

But the trees aren’t the only ones changing colors in preparation for winter. Much of the wildlife found in our county parks are also getting ready by changing their coats. Foxes and coyotes grow thicker, denser coats, adapting to the colder temperatures, while some animals even change the color of their coat in an attempt to disguise themselves from predators during the winter. If you are lucky enough to spot an ermine (a winter weasel) or a snowshoe hare in mid-color change from brown to white, you’ve seen something truly special.

For me, a particular vivid image of wildlife preparing for fall is the black bear I spied in Boulder Canyon one September day in full pig-out mode. He’d found himself an apple tree and was sitting on his butt, legs spread out in front of him, shoveling apples into his mouth as fast as he could. That was one happy bear! But it’s not surprising to see a bear so obsessed by eating during fall, as bears put on a lot of weight prior to winter denning. An adult black bear can consume up to 20,000 calories a day while in the midst of this obsessive eatingthat’s like eating 400 Oreo cookies!

Bears are not alone in preparing for a long period of sleep during the winter. Unlike bears that actually den for long periods, bats truly hibernate during winter, sinking into such deep sleep that they appear dead. During hibernation, their heart beat drops from 400 beats per minute to as few as 25 beats per minute and their body temperature may drop as low as 44 degrees. Bats begin their hibernation sometime in September or October, and can sleep for as many as 80 days straight. You never know when you might encounter a hibernating bat, as they like old barns and attics as much as caves and trees. We even found one hanging off a beam in our house one fall day!

Like the wildlife and plants around us, we as visitors to county parks, must be prepared to change as well during autumn. In autumn, weather conditions change quickly, bringing snow and subfreezing temperatures as early as September to our higher elevations. But a walk or bike ride in autumn also offers a chance to glimpse the beauty and marvel of nature in transition, reaching its finest moments.