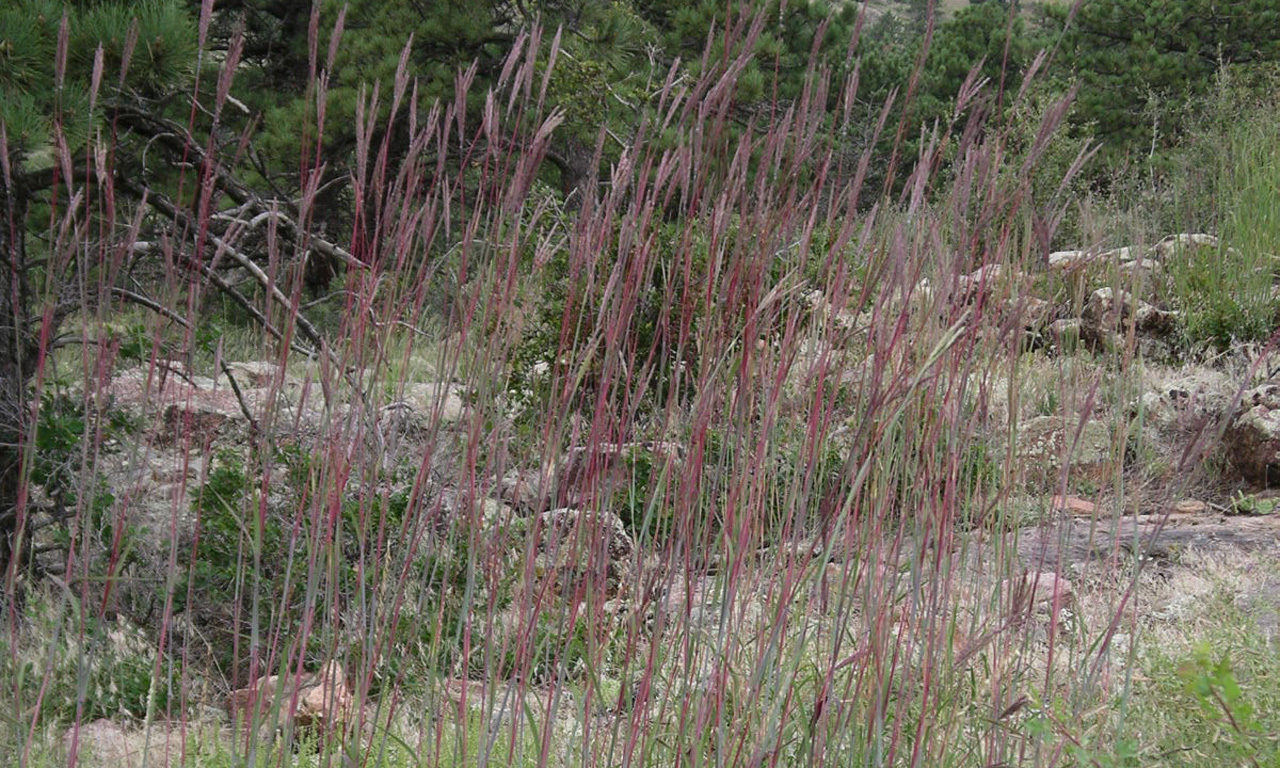 Though grasses may look like a uniform blanket of green, native grasslands play an important role in Front Range ecosystems. Wherever grasses grow, they provide important forage for grazing animals. Their seeds also provide food for birds and small mammals, and taller grasses provide cover from predators for small animals. Native grasslands also come in several varieties that differ based on elevation, precipitation, and soil type.

Shortgrass prairie once dominated the flatlands of Boulder County. Today, nearly 50% of this ecosystem has been lost to agriculture and other disturbances. Because Colorado’s high plains are often subject to drought, the grass species of the shortgrass prairie are typically compact, helping them to conserve water. These grasslands once supported vast herds of grazing animals like bison, pronghorn, elk, and deer, as well as prairie dogs and even wolves and grizzly bears. You can still see this ecosystem at Coalton Trailhead in Superior, though without the wolves, bears, bison, and pronghorn.

People who replace their lawns with drought tolerant, native species still use the primary species of this ecosystem: blue grama grass and buffalo grass. Besides being tolerant of drought, these grasses are also well-adapted to fire and grazing, making them some of the toughest plants around.

In addition to the shortgrass prairies on the plains, the foothills often support areas of grassland between shrubs and woodlands. A quick meteorology lesson: warm air can hold more water vapor than cold air. As moist air from the Gulf moves toward the Front Range, it’s forced upward and begins to cool, causing some of that water vapor to fall out as rain, which is why in summer we often get afternoon thunderstorms. Much of this precipitation falls in the foothills, which are a bit cooler than the plains. This combination of cooler temperatures and slightly increased precipitation creates ideal conditions for the Western Great Plains Foothill grasslands.

Many of the grass species here are significantly taller than the species of the shortgrass prairie. Big bluestem, which dominates the tallgrass prairies of the east, but occurs in patches in the foothills, often lives up to its name, averaging four to eight feet tall! Many of the grass species here occur in large swaths in the middle of the plains where precipitation is higher but decrease to patches in Colorado’s plains, where precipitation is low. The species then appear more frequently again in the wetter foothills. Although a smaller proportion of the Western Great Plains foothill grassland has been lost compared to the shortgrass prairie, residential development, overgrazing, fire suppression, and invasive species have degraded much of this ecosystem. You can check out the Western Great Plains Foothill grassland at Betasso Preserve.

Both the shortgrass prairie and the taller grasses of the foothills provide services to humans as well as animals. Unlike domesticated food grasses you might be familiar with, like corn and wheat, most native grasses are perennial bunchgrasses, meaning they come back year after year in the same place. Their perennial nature allows them to build large root systems over their lifetime, digging deeper and wider. As their root systems get bigger, native grasses can capture more water, making them more drought tolerant than the average lawn. They also suck up carbon dioxide from the air and send it into the soil, making grasses one organism that helps mitigate the effects of climate change. Finally, their extensive root systems also trap soil in place, preventing erosion. Although they may not look like much above ground at this time of year, native grasslands do a lot for humans and animals.