Yucca and the Moth 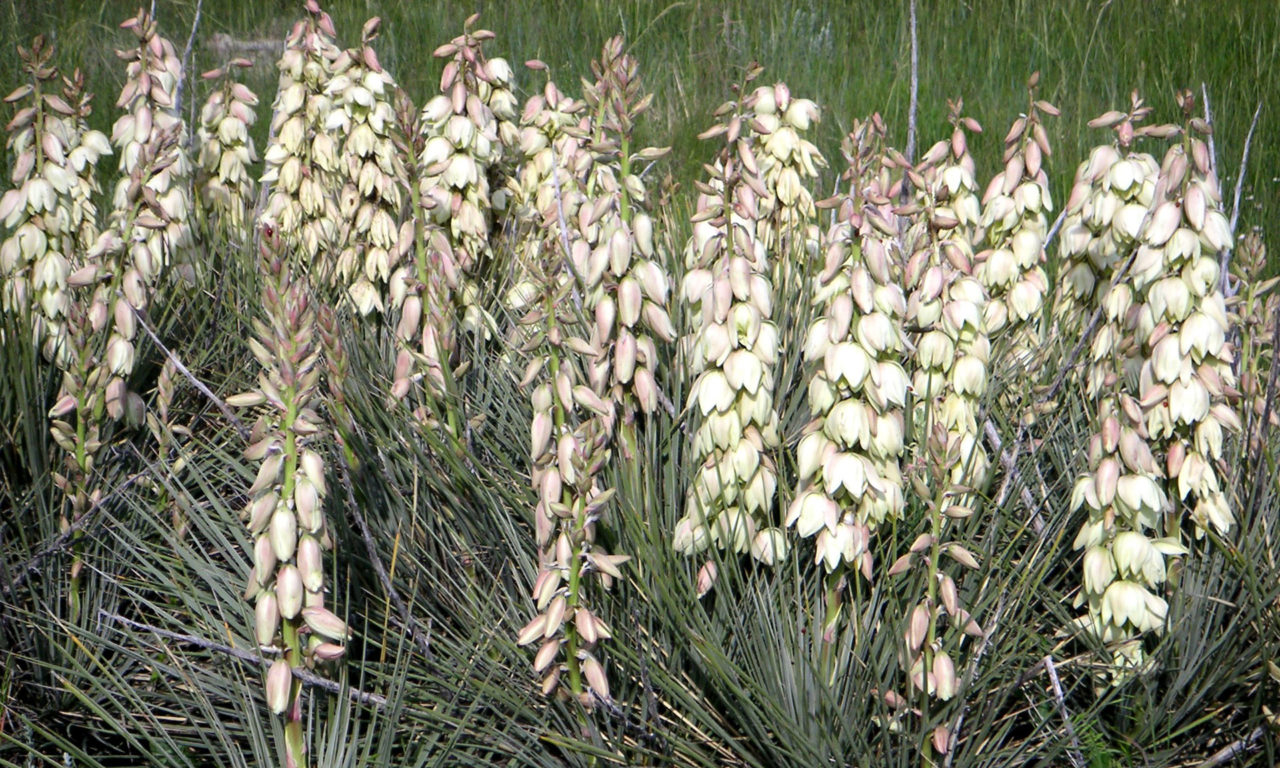 With its sharp pointed leaves and large white flowers, the yucca is one of the more ubiquitous plants of the foothills and outwash mesas of Boulder County. It is especially hard to miss if you accidentally back into one. One might imagine these spiny plants have more in common with their kin the cacti family, yet they are actually placed in the lily family.

Yuccas can be found from the plains of Canada, southward through the Great Plains, where a few species occur, to the Southwest, Texas, and into Mexico, where dozens of species reside. Yucca glauca is the common species found in Boulder County. Sometimes confused with their close kin, the agaves, yuccas differ by having smooth edges to their leaves, while agaves have spines along their leaf edges. Yuccas are the bane of ranchers (not to mention hikers and bikers) for their limited palatability for cattle, and are often a sign of overgrazed grassland. Their sharp defenses, however, also act as a refuge for other plants from grazing.

The yucca’s sharp attitude can be forgiven in May, when a flower stalk arises towering two to three feet high, adorned with dozens of large white flowers, often tinged rose. The flowers are some of the largest of any flowering plant in the county. This fact does not go unnoticed by one pollinator that has a fascinating relationship with the plant. The large white flowers, which open most fully at night, are visited by a moth in the family, Tegeticula. This single species of moth is the sole pollinator of our yucca. In fact, each species of yucca has a corresponding species of moth that pollinates it, and both plant and insect depend on each other for their very survival.

After a male and female moth mate, the female goes off in search of a yucca blossom. When she finds one, she gathers pollen with specialized organs near her mouth. She then visits another plant, searching for a flower to lay eggs in. Depositing her eggs into the ovary of the flower ensures the larvae can hatch sheltered from the elements and are guaranteed a food source in the ripening seed, which was fertilized by the visiting moth with pollen from other flowers.

A Story In The Seeds

If you look at a yucca seed pod when it first begins to open, you will find a hundred or more black seeds the diameter of a pencil eraser. Like a page from the children’s book, “The Hungry Caterpillar,” most of the seed will have a hole bored through it. But not all. Or at least not all within a single plant. This is where things get interesting.

If the larvae ate all the seed, they would increase in numbers, which would be good for the moth, but eventually would prevent any new yuccas from establishing, thereby jeopardizing their own survival. For the yucca’s part, it would do much better without any larvae eating its seeds, but without the moth it would go unpollinated and produce no viable seed at all. This obligate, mutualistic relationship means that the moth cannot survive without the yucca’s food and shelter, and the yucca cannot survive without the moth’s pollination.

Both species play a role in this carefully choreographed evolutionary dance. When the female moth is visiting flowers, her antennae can detect if another moth has already laid eggs in that flower. If so, she will avoid laying more eggs and visit another flower. The yucca does its part too. Studies have shown that yuccas are able to detect when there are too many eggs within a flower and abort those flowers, so as not to lose all its seed and to keep the moth population in check. Such checks and balances ensure that there is just enough seed to feed a new generation of moths but not too many larvae, to guarantee a new generation of yucca seedlings on the landscape to poke the next unsuspecting hiker.