A Chorus of Frogs 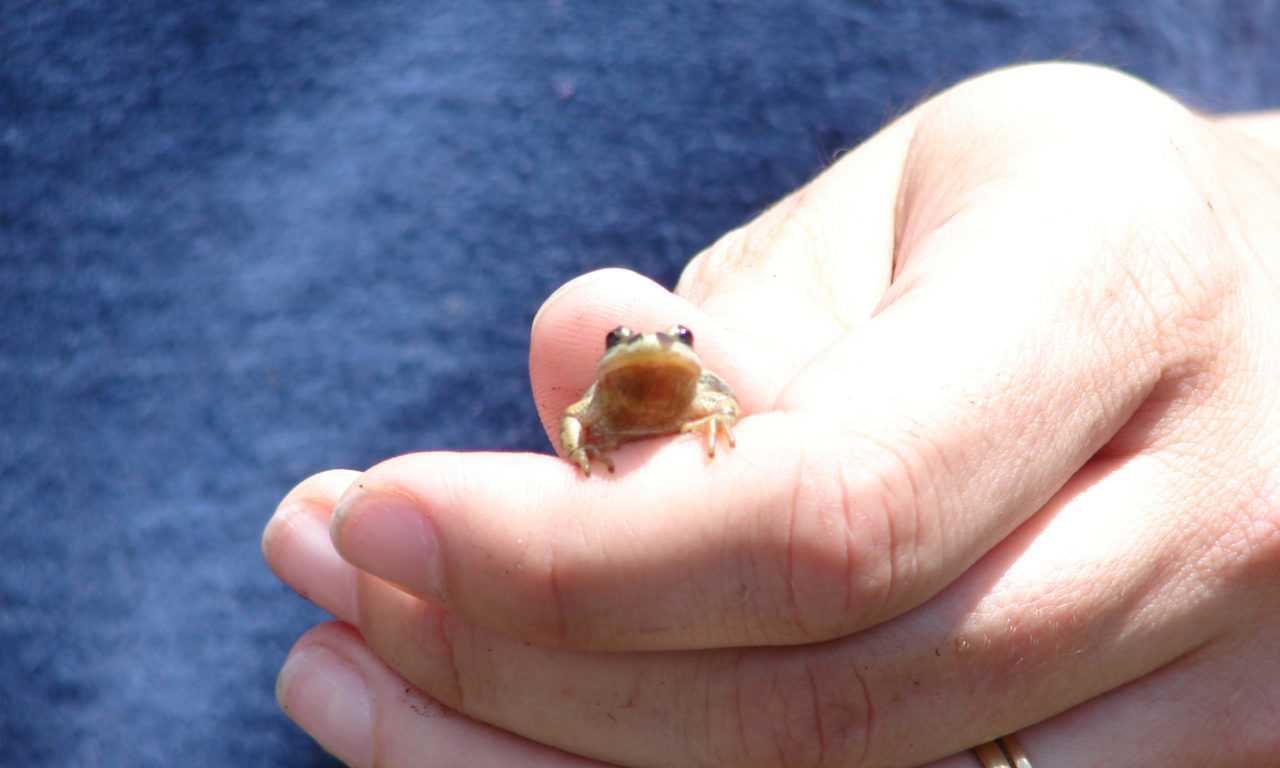 Years ago, as I wandered Walden Ponds Wildlife Habitat in spring, the seething energy of life after winter seemed intensely joyous. That walk inspired a kids’ poem. My delight never waned. There’s a magic in the first signs of spring, a sense of gratitude, and relief at the renewal ahead.

Nothing represents that feeling more than hearing chorus frogs. Stop alongside a cattail-edged pond, especially a place too shallow for fish. Listen! That rasping, insistent sound is often likened to running your fingers along the teeth of a comb. It is loud and incessant, until you step too close when it abruptly stops.

Where on earth is the sound coming from? You’d expect a largish creature—maybe of bullfrog proportions—but no. If you’re lucky enough to find these tiny frogs, perhaps by seeing ripples in open water between cattails, you’ll see that they are merely an inch or so long and well camouflaged. Wait until the frogs start chorusing again, and you’ll see an almost translucent amphibian, its throat pouch swelling with air like a mini balloon, as it calls to find a mate. Sounds are audible, around 65 decibels (comparable to a vacuum cleaner or hair dryer) and can be heard from up to a half-mile away.

The frogs call by pushing air from lungs to the throat sac and back over their vocal cords. Frogs don’t hear through external ears as we do. They have eardrums (a flat round patch behind each eye) and inner ears.

Once males find partners and mate, the cycle begins. Females lay clusters of eggs (frogspawn) that they attach to vegetation. In two to three weeks eggs hatch into tiny tadpoles, which feed on algae and grow apace. At this stage, tadpoles breathe through gills. Only later when they begin to morph into froglets do gills shrink and lungs take over. It takes 12-15 weeks for tadpoles to become frogs. Adult frogs are carnivores feeding on insects, spiders, worms, and snails. They catch food with a long tongue and swallow it whole (their eyeballs press downward to aid swallowing).

Meanwhile, tadpoles and frogs are trying not to become food for other animals. They may become prey to skunks, raccoons, herons, snakes, shrews, and fish. Even bullfrogs, a non-native species that has changed the frog dynamics in many wetland areas, will eat them.

No wonder chorus frogs are constantly alert to movements and sounds around them. How do they avoid becoming prey? First, they stay hidden and silent when necessary. Second, frogs have poison glands in their skin and may taste bad, an off-putting, if not lethal, deterrent. The best defense for small frogs is probably escape by leaping. With luck, their powerful hind legs can propel them far enough to avoid becoming dinner.

Life is precarious. Frogs are lucky if they survive five years in the wild; most don’t make it that long. To survive to winter, frogs must hibernate beneath the ground or in mud at the bottom of ponds, completely still and scarcely breathing. There they’ll stay until the nights warm, and spring finally comes. To survive for the long haul (they have been around since dinosaur times), frogs need fresh, untainted wetlands and unspoiled habitat. They need to survive the chytrid fungus that threatens amphibians worldwide and has already decimated frog populations in many places.

Collective nouns are always fun—a gaggle of geese, a murder of crows—and now think of “an army of frogs.”  As you enjoy the army of frogs this spring, join the army of people championing their well-being!

Five mallards quack the alto
As they swim across the pond,
While a robin sings her descant
From a lacy willow frond.

What’s this rhythmic, lilting lullaby
The marsh dwellers sing
In the mossy, musky evening?
It’s the opera of spring.