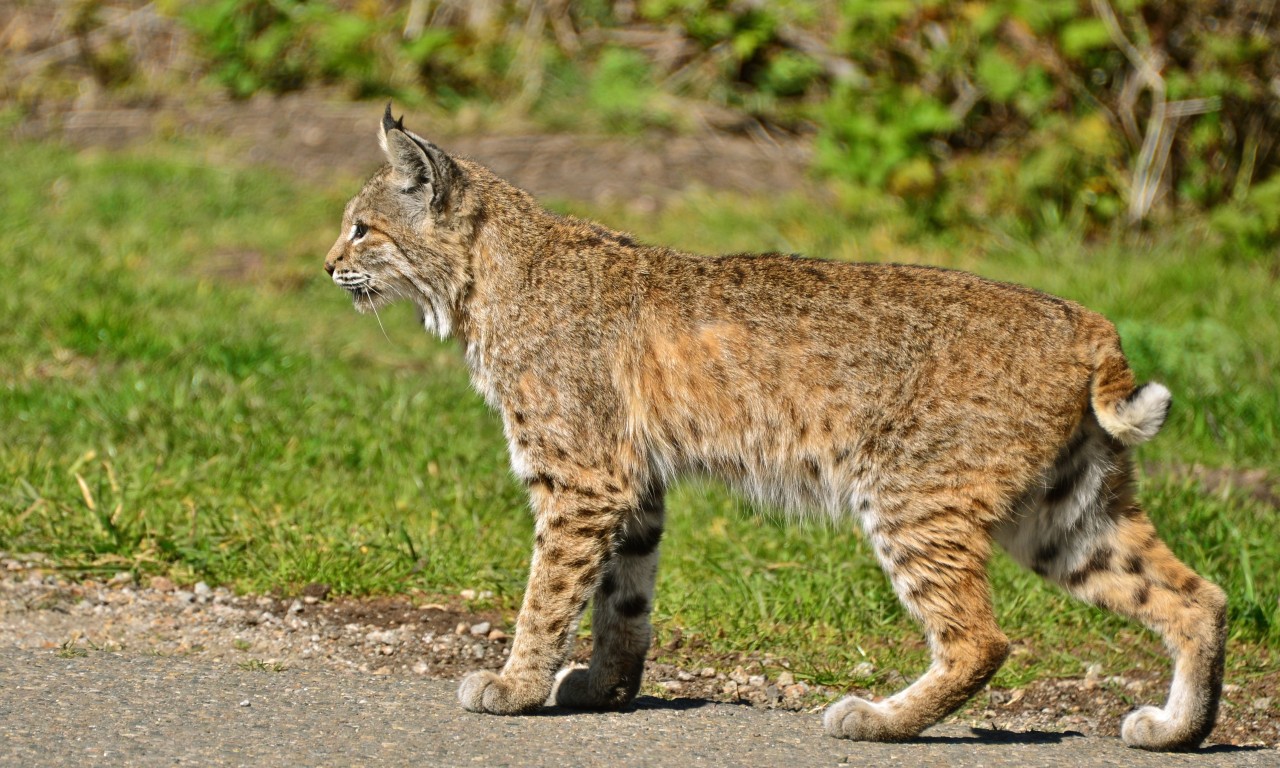 Rarely seen because of his crepuscular (active at dawn and dusk) habits, the bobcat (Lynx rufus) is actually the most abundant and widespread wild cat in North America. Long valued for its fur, this species has been hunted and trapped, but has maintained a high population. Twice the size of a domestic cat, it is smaller than the Canada Lynx, with which it shares parts of its range. It sports a gray-brown coat, whiskered face, and black-tufted ears. Distinctive characteristics are black bars on its forelegs and of course the black-tipped, stubby tail, from which it gets its name.

Swamp to Desert—Rabbit to Chicken

The bobcat is a very adaptable predator, both in terms of habitat and prey selection. It prefers woodlands—deciduous, coniferous, or mixed—and it ranges from the humid swamps of Florida to the desert lands of Texas and up to rugged mountain areas. In Colorado, its preferred habitats are pinyon-juniper woodlands and montane forests, but it will not disdain agricultural areas if rocky ledges or forest patches are present. It may appear in backyards in “urban edge” environments, at the intersection between human development and natural habitats.

Though the bobcat prefers rabbits and hares, it will hunt small rodents, foxes, minks, porcupines, small birds, insects, and deer fawns. It will also kill chickens, young sheep, and goats. Prey selection depends on location and habitat, season, and abundance.

Bobcats use multiple strategies while hunting. They may approach stealthily, using any form of cover available between them and their prey, attempting to get close enough to pounce and strike. When pouncing, they can leap up to 10 feet. With smaller prey, they often use an ambush technique, sitting and waiting for prey to pass by. Smaller prey items such as mice and birds are consumed whole. Deer are killed when bedded down, with multiple bites to the neck and throat.

Although bobcats may breed at any time of the year, most mating happens in February and March. Both males and females are not monogamous and will mate with multiple partners. The female raises the young alone. Usually two to four kittens are born in April or May. They stay with their mother until the fall when they disperse.

Adult bobcats have few predators beside humans, namely mountain lions and coyotes. Kittens may be taken by several predators, including owls, eagles, and foxes, as well as adult male bobcats.

From 2010 to 2012, Parks and Open Space collaborated on a CSU study tracking bobcats at Betasso Preserve, Hall Ranch and Heil Valley Ranch and in more developed areas closer to Boulder. In total, 20 animals were radio-collared and 40 cameras were placed. The aim of the study was to compare habitat use, movements, and bobcat interactions with visitor trail use and vegetation type, between our natural areas and more urban-fringe areas. Data from hundreds of locations and thousands of photographs are still being compiled and analyzed.

17 Second Snapshot
A trail camera at Hall Ranch captures a bobcat and her kitten on a walk. 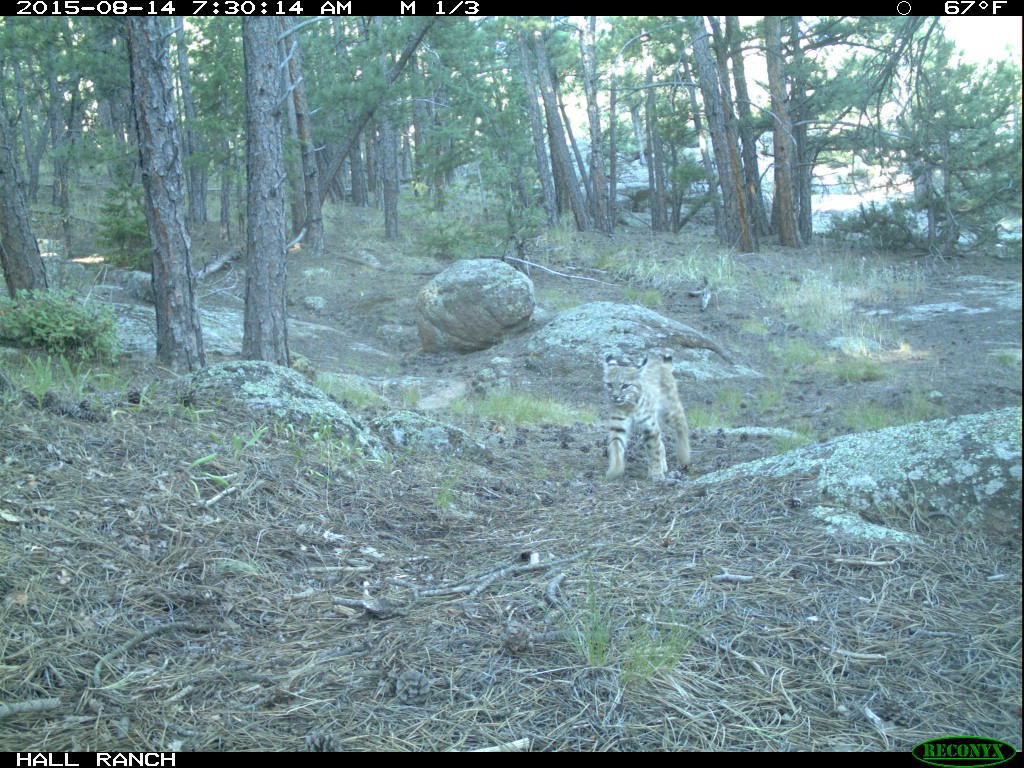 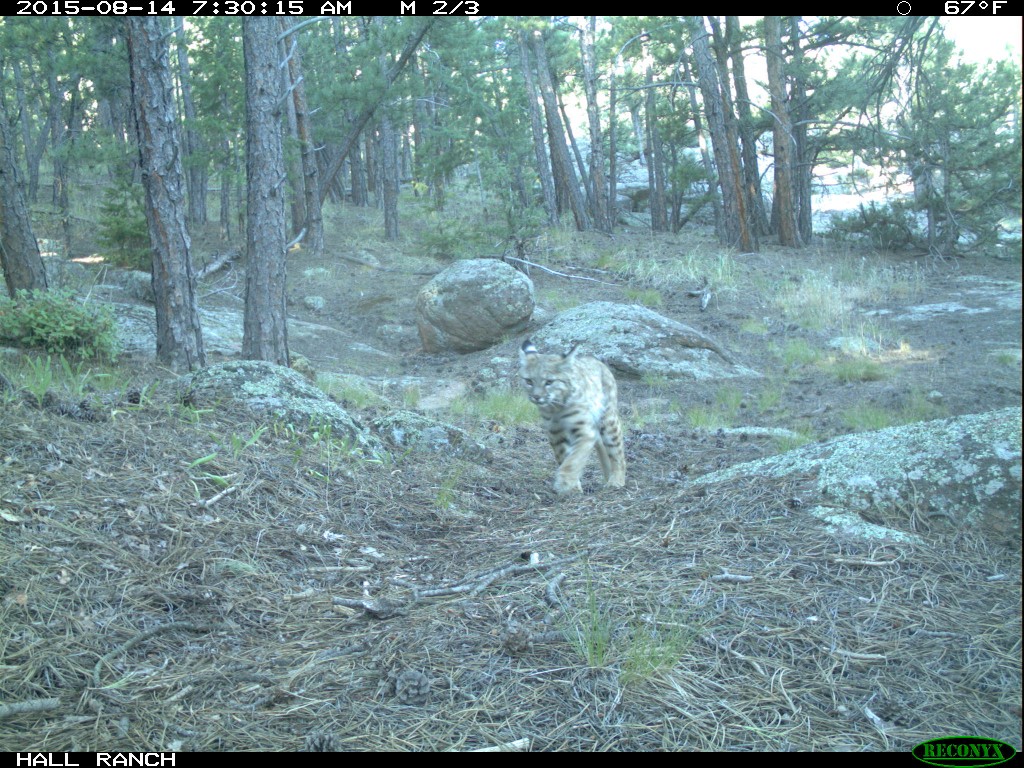 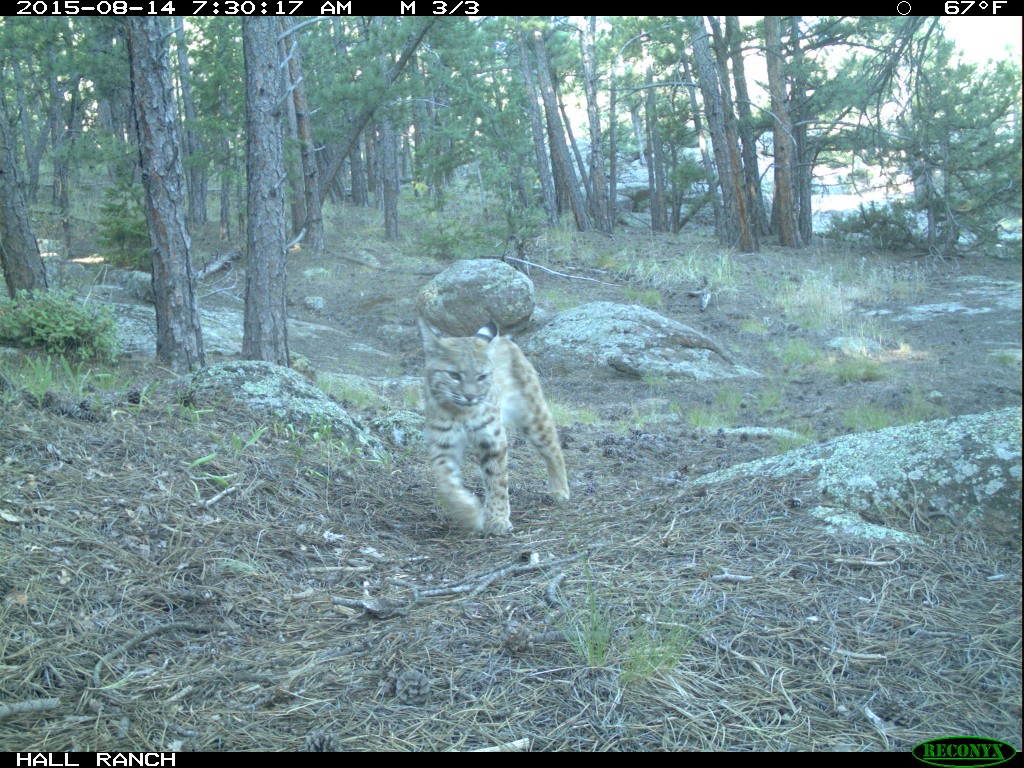 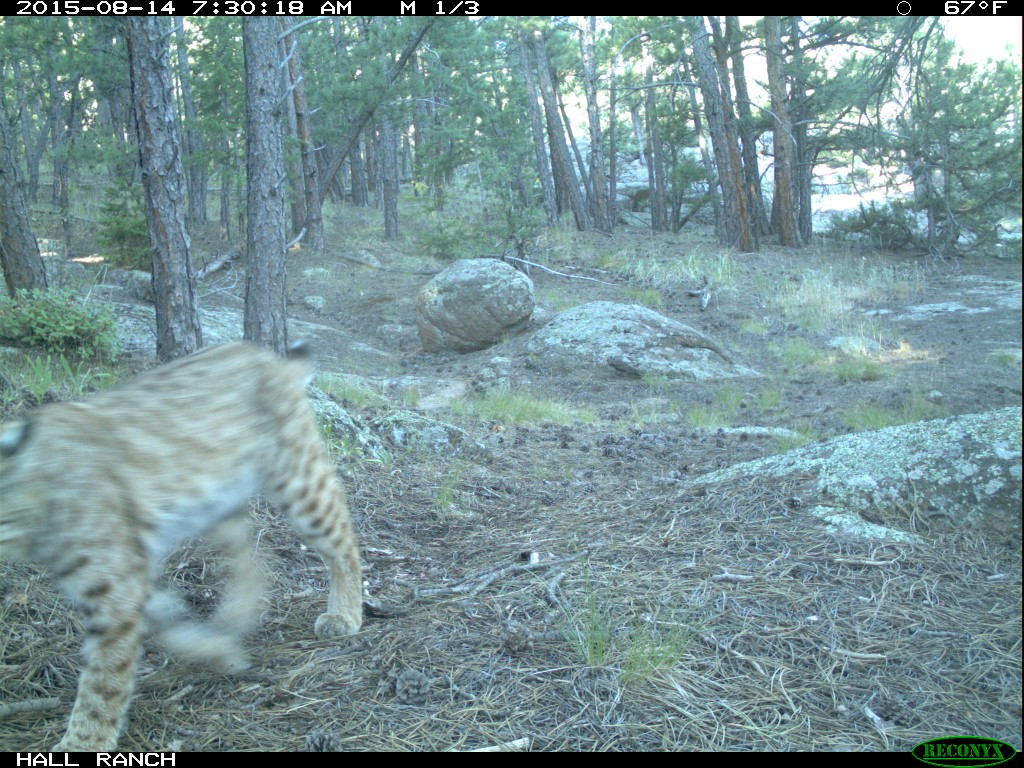