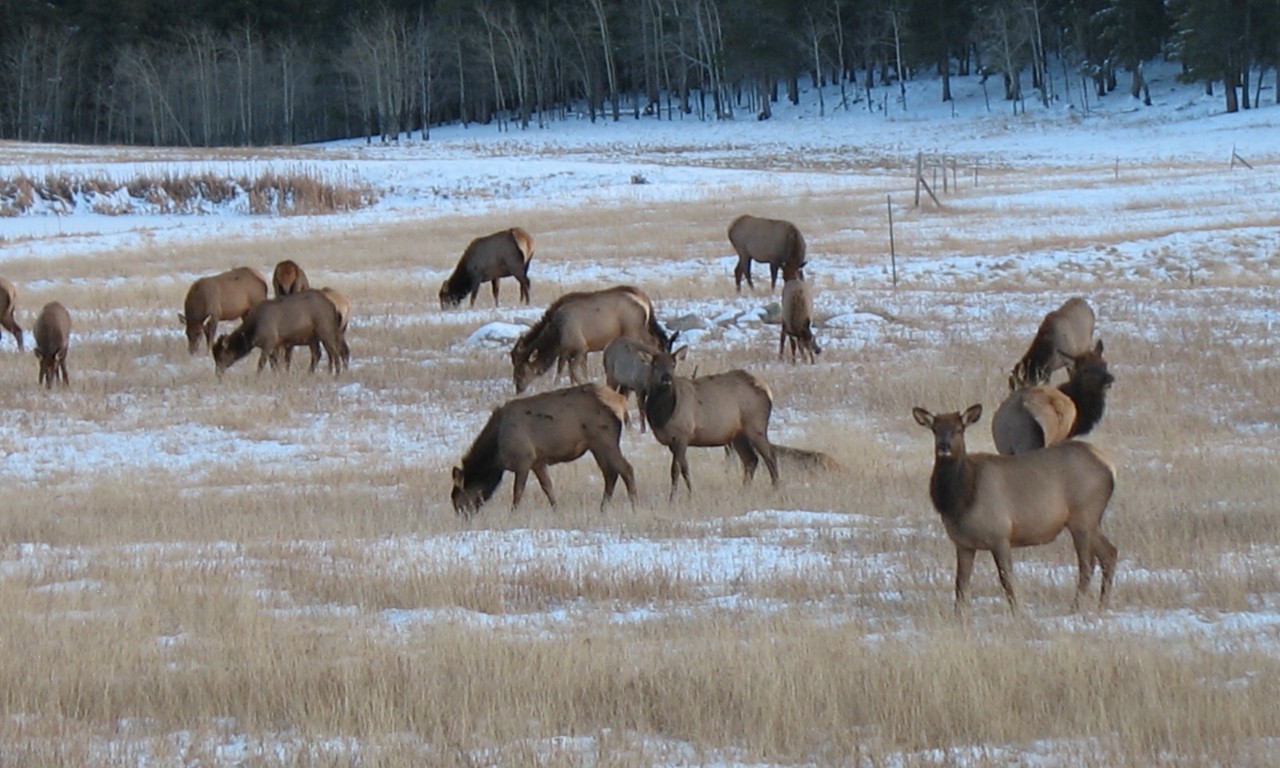 It’s hard to imagine Colorado without the iconic elk, but around the turn of the 19th century, elk were nowhere to be found in Boulder County. Statewide extirpation was a distinct possibility. During the late 1800s and early 1900s, Colorado experienced a rapid influx of prospectors and homesteaders who thought of game as infinitely abundant, and as a result, elk populations suffered a significant decline. The federal government took notice of this and passed legislation to close Colorado elk hunting from 1913 to 1929. At the same time, elk refuges were being designated in the Greater Yellowstone Region to save this important mammal from further decline. Fortunately, from 1912 to 1928, 14 reintroductions were completed in Colorado alone, totaling approximately 350 elk.

Today, Colorado Parks and Wildlife (CPW) estimate total elk populations to be around 264,000 animals in 43 managed units/herds. Of those 43 herds, one along the Front Range in Boulder County is truly emblematic of the wild species. The North Boulder Elk Herd, being extremely skittish and wary of human contact, displays behavior and an attitude toward humans more typical of natural elk behavior. This demeanor runs in stark contrast to elk found in and around Estes Park who are habituated to human contact and are thus losing some of what makes them wild.

When the majority of Heil Valley Ranch Open Space was purchased during 1993 and 1994, little was known about the North Boulder Elk Herd that supposedly used this area as winter range. In fact, it was not entirely clear whether the herd traveled up into Indian Peaks Wilderness during summer months, if they were year-round foothill residents, or if it was some combination of the two. With that said, when Boulder County purchased Heil Valley Ranch, a subset of the larger North Foothills Open Space (NFOS), an extensive elk study was proposed. The study aimed to determine exact information regarding elk movements, seasonal ranges, population numbers, and dynamics in order to effectively manage Heil Valley Ranch and adjacent open space properties.

Beginning in 1997, Boulder County Parks and Open Space (BCPOS) and CPW began radio-collaring elk cows for observation. Over the next 10 years these animals were monitored via radio-telemetry. During this monitoring stage, it was confirmed that the North Boulder Elk Herd consistently migrated in the summer from the Indian Peaks Wilderness Area to Heil Valley Ranch and the larger NFOS during the winter months. This observation solidified the North Foothills Open Space area as critical elk habitat for mating and winter foraging. In addition to understanding seasonal movements, this data continues to play a critical role in the department’s land acquisition decisions, development practices, and planning of new trails.

An interesting component of the study period coincided with the opening of recreational opportunities at Heil Valley Ranch. The Lichen Loop, Wapiti and Ponderosa Loop trails opened in March 2000 and October 2001, offering the county a rare opportunity to observe how elk would respond to the introduction of predictable and consistent human traffic. Prior to the trails opening in 2000 and 2001, elk use in the recreation corridor was consistently observed, but after the trails opened, elk activity at Heil Valley Ranch became more fragmented. This shift in grazing habits is largely due to human presence in the area and is a contributing factor to Heil Valley Ranch’s critical wildlife habitat closures. The western closure not only plays an important role in elk habitat serving as a consistent area of use during the rut, but also serves as habitat for other sensitive creatures such as golden eagles, prairie falcons, pine martens, black bears, and mountain lions. The eastern closure, while notoriously rugged, is also pristine elk habitat and an important travel corridor between Heil Valley Ranch and the rich grazing opportunities found on the high plains. Furthermore, it is an excellent north/south travel corridor for other large mammals including mule deer, mountain lions, and black bears.

As Boulder County moves forward and the human population continues to rise by a projected 0.1 to 0.9 percent per year until 2040, sound land management practices will become even more crucial to maintaining an ecological balance between human recreational needs and wildlife survival needs. This balancing act is particularly significant at Heil Valley Ranch and is a success story that should be touted. With a total of 14.6 trail miles running north/south through the recreation corridor and significant untouched wildlife closures on the eastern and western sides, an equilibrium between human opportunities to play and wildlife opportunities to forage has seemingly been reached.

Elk in Colorado have rebounded dramatically since the early 1900s, but this conservation story is far from over. The North Boulder Elk Herd continually faces new hosts of challenges from chronic wasting disease to increased habitat fragmentation. It is up to Boulder County government and its residents to work together and responsibly manage these open spaces for the betterment of not only overall ecological health of the area, but also for the recreational endeavors of future generations. 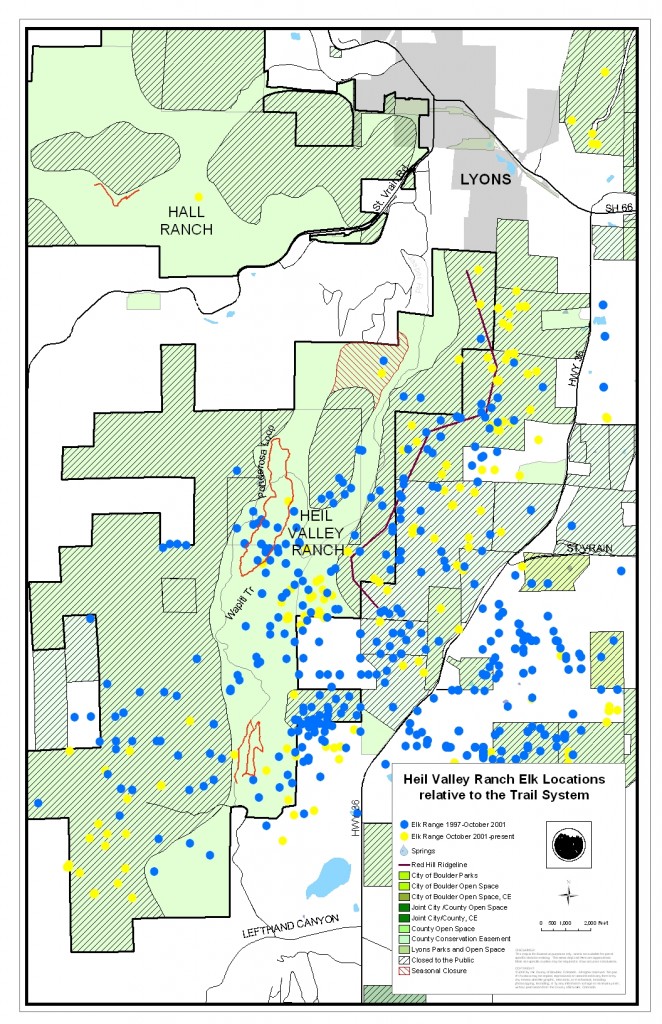