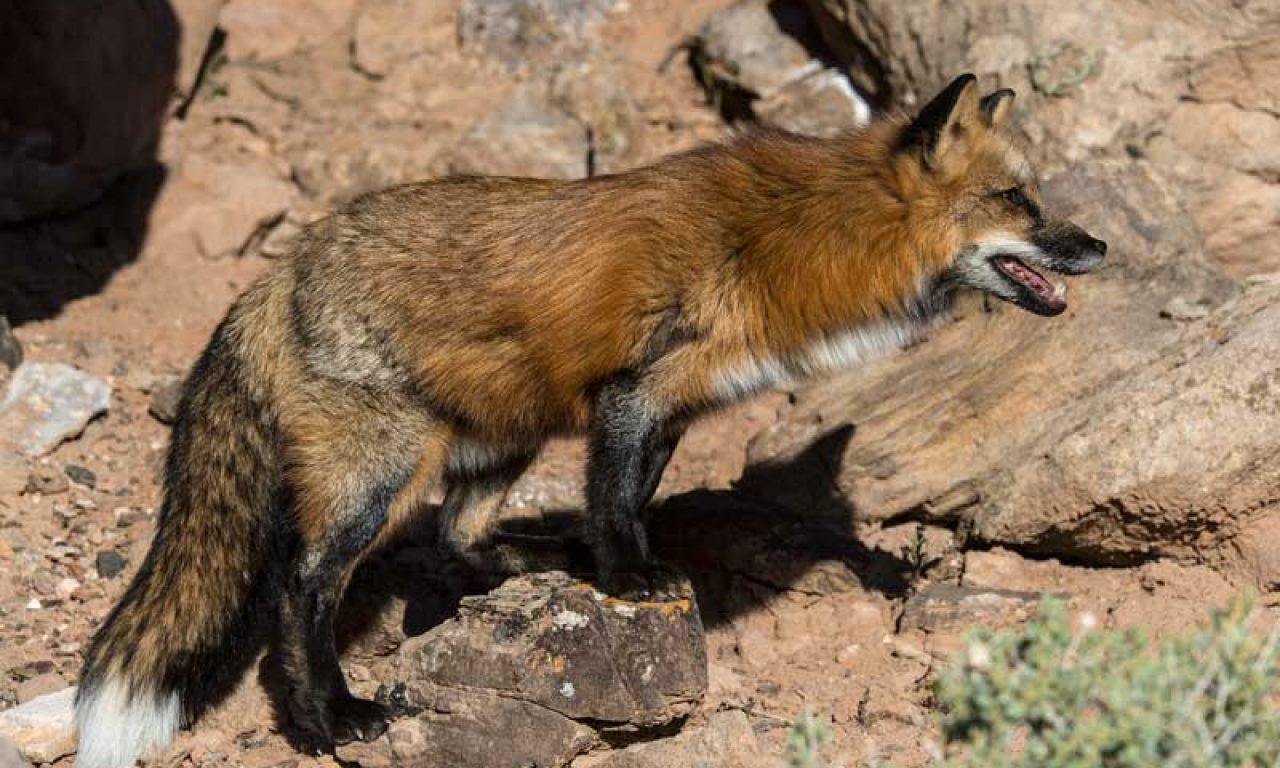 Among the most handsome and clever of Boulder County mammals is the fox. We are apt to see the red fox (Vulpes vulpes) more often than the gray fox (Urocyon cinereoargenteus). Red foxes look similar to a small, slender dog, with pointed erect ears and weigh up to 15 pounds. The red fox is not always red; genetic variations result in four recognized color phases:  red (the most common), silver, black, and cross. A white-tipped bushy tail is characteristic in all four color phases. The gray fox weighs up to 11 pounds. Colorings include gray on top, rusty-red on the sides, a white throat and a dark-tipped tail. Male and female foxes have few differences in appearance, but behavior can distinguish them. Males roam more freely; females (vixens) tend to stay in the same territory for life.

North To South & East To West

The range of the red fox is vast (the entire Northern Hemisphere) while the gray fox is plentiful along the western U.S. coast and also makes its home in southern North America and northern South America. At one time, the gray fox was the most common fox in the eastern U.S., however, deforestation and human advancement allowed the red fox to become more dominant. In Colorado, red foxes are common on the plains in open farmlands, riparian woodlands, and brushy areas along the foothills. They do well on the edges of urbanized areas. The top months for observing red foxes in Colorado are January, February, April and October. Gray foxes prefer Colorado’s desert-like regions, hiding among boulders on the slopes of rocky ridges in canyons and brushy areas along the foothills. In areas where both red and gray foxes exist, the gray fox is dominant.

Foxes are important predators of rabbits, mice, and rats. They are omnivores, meaning they eat both plants and animals. Solitary hunters, foxes eat small rodents, squirrels, birds and eggs, amphibians, reptiles, fruits, nuts, carrion, insects, and garbage. The gray fox generally eats more vegetable matter than does the red. Foxes are nocturnal which helps them coexist with humans and urban development.

The fox’s famous “mousing leap” appears as a playful way to attack its prey. The fox lies flat on the ground, silently creeps toward the prey, and then launches into the air, landing directly on its unlucky target. Foxes can even locate and catch prey moving under three feet of snow! Despite being a canine species, foxes actually resemble cats more than dogs in many ways. Their pupils are cat-like vertical slits, which gives them excellent night vision. The gray fox is the most cat-like fox species. Its semi-retractable claws make it a good tree climber, easily jumping from branch to branch to reach tree-bound food sources.

The reproductive cycle between male and female foxes begins between December and April, depending on region and climate. Foxes generally mate in pairs. Paired foxes seek out the same mate from the previous breeding season. Males have been known to mate with multiple females at one time, and when this occurs, they all give birth in and inhabit the same den. Females give birth to four or five offspring, called kits or pups. The male fox never enters the den where the female is caring for the young. At 10 months old, young foxes reach sexual maturity.

For centuries, the red fox was captured by humans for its luxurious pelt. These days the red fox is preyed upon by wolves, coyotes and mountain lions. Gray foxes have been much more difficult for people to capture than red foxes due to secretive living habits, a tolerance for dry conditions, and intolerance for civilization. The main predators of the gray fox are the coyote, bobcat, great horned owl, and golden eagle.

Healthy foxes pose virtually no danger to humans. They frequently inhabit yards, parks, and golf courses and can become accustomed to human activity. Animals acting abnormally or appear to be sick should be avoided. Problems associated with foxes include plundering of domestic animals and their potential to carry disease organisms. Where foxes are continually present, it’s best not to allow pets to run free. Protect your chickens and close off crawl spaces under porches and decks. Foxes that travel into residential areas can be scared away with bright lights, loud noises, and water sprayed from a hose.

Carry binoculars the next time you venture into the foothills. If you’re lucky, you might go home with lovely photos. Listen for their “yap” or bark to help you discover their hiding places. They’re elusive enough to enchant when seen, but common enough to see along many of Boulder County’s foothill trails.