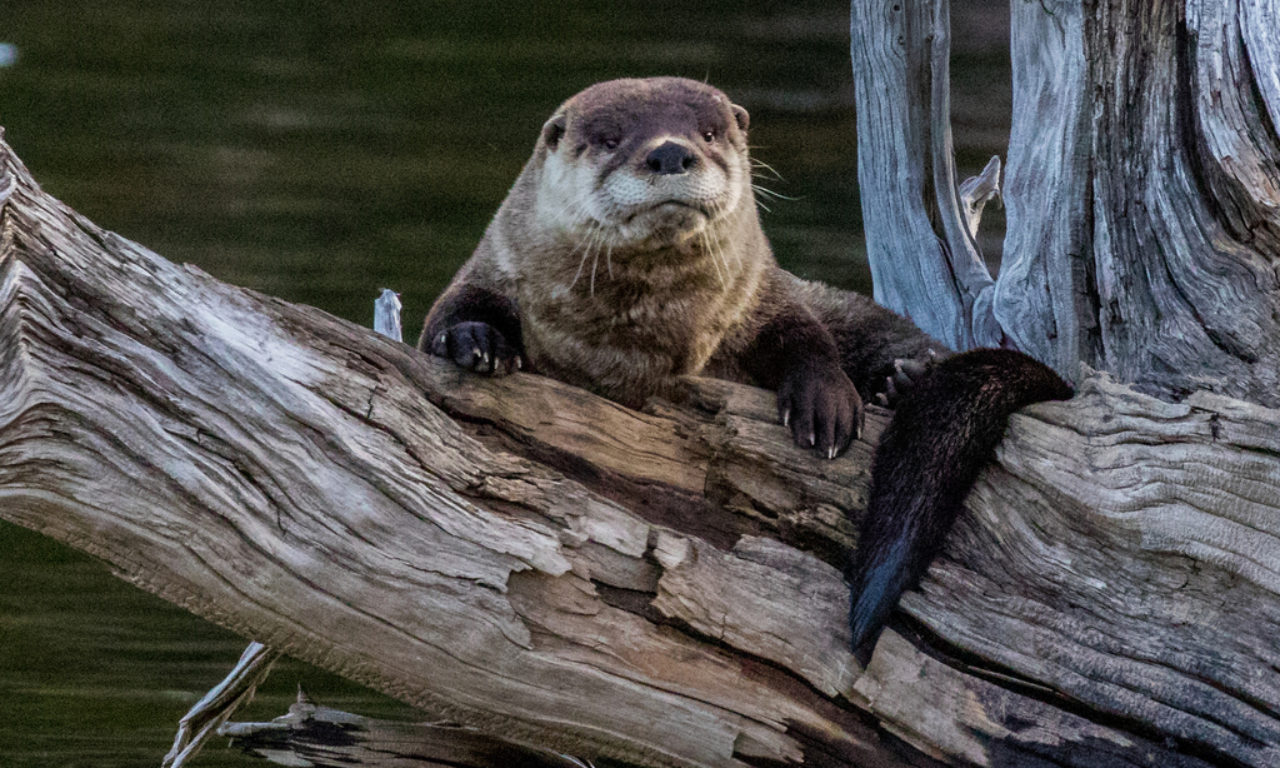 Although survival is the main focus for many species of wildlife, some animals enjoy being playful, and probably none of them beats out the mischievous spirit of the river otter. Otters can be seen sliding down snowbanks, pestering ducks and anglers, or even lying on their back waving a paw in an energetic hello. This fast and sleek member of the weasel family is fun to watch as it slithers through water, or inchworms across the land. Otters can also catch fish and eat them at lightning speed.

The North American river otter is found across the continent in riparian areas, similar to environments where beavers set up shop. They can inhabit the same space—beavers are herbivores, while otters are carnivores. The beavers may be happily munching on tree branches and plants, while otters benefit from the fish buffet that accumulates in ponds created by beavers. Otters will sometimes take refuge in abandoned beaver lodges and have even been known to occupy portions of a lodge while beavers still live there.

River otters have made a comeback in Boulder County over the last few years. Eric Odell, Species Conservation Program Manager with Colorado Parks and Wildlife, says that river otters were extirpated in Colorado in the early 1900s, because of overharvesting, habitat modification, and lack of regulations. The agency began reintroducing otters to Colorado in the mid-1970s, mostly focusing on west slope rivers.

In 2013, river otter sightings began showing up in Boulder County. “We are not doing active management to reintroduce otters to any additional part of the state—they seem to be expanding on their own,” said Odell. “The only otters reintroduced to the Platte drainage (which Boulder is part of) were a handful of otters upstream of Denver. The otters here are either descendants from those animals or dispersers from populations reintroduced into the upper Colorado.”

Some of the sightings locally have been reported on iNaturalist.org. This website is a storehouse for photos of plants and wildlife across the world. Several photos of river otters in the Brainard Lake area were posted on this site within the last year. Otters have also been spotted at Heil Valley Ranch Open Space, Pella Crossing, and in other areas along the St. Vrain stream corridor.

River otters are often a sign of a healthy waterway since they are highly sensitive to pollution. “Otters may be an indicator of a healthy creek that has fish enough to feed them, space for them to exist, and other otters to breed with,” said Dave Hoerath, a wildlife biologist with Parks & Open Space. They are also top predators, helping to control prey populations, including fish, crayfish, and frogs. An otter’s webbed toes help with swimming, and sharp claws help grasp fish and other food. A third eyelid—or nictitating membrane—protects its eyes underwater like a pair of goggles.

River otters are sometimes confused with mink (commonly seen in many Boulder County riparian areas) but are much larger. Otters are three- to four- and-a-half feet in length, have a very thick, powerful tail, and weigh anywhere from 11 to 30 pounds. To identify them from water-sharing beavers, look at their tails. A flat, wide tail is a sure indication of a beaver, while the otter’s tail is round and thick.

Besides the benefits to the ecosystem provided by river otters and the general excitement of having them back in their former habitat, otters are just fun to watch. Welcome back to Boulder County, Lontra canadensis!