Snakes Alive – Are you Rattled? 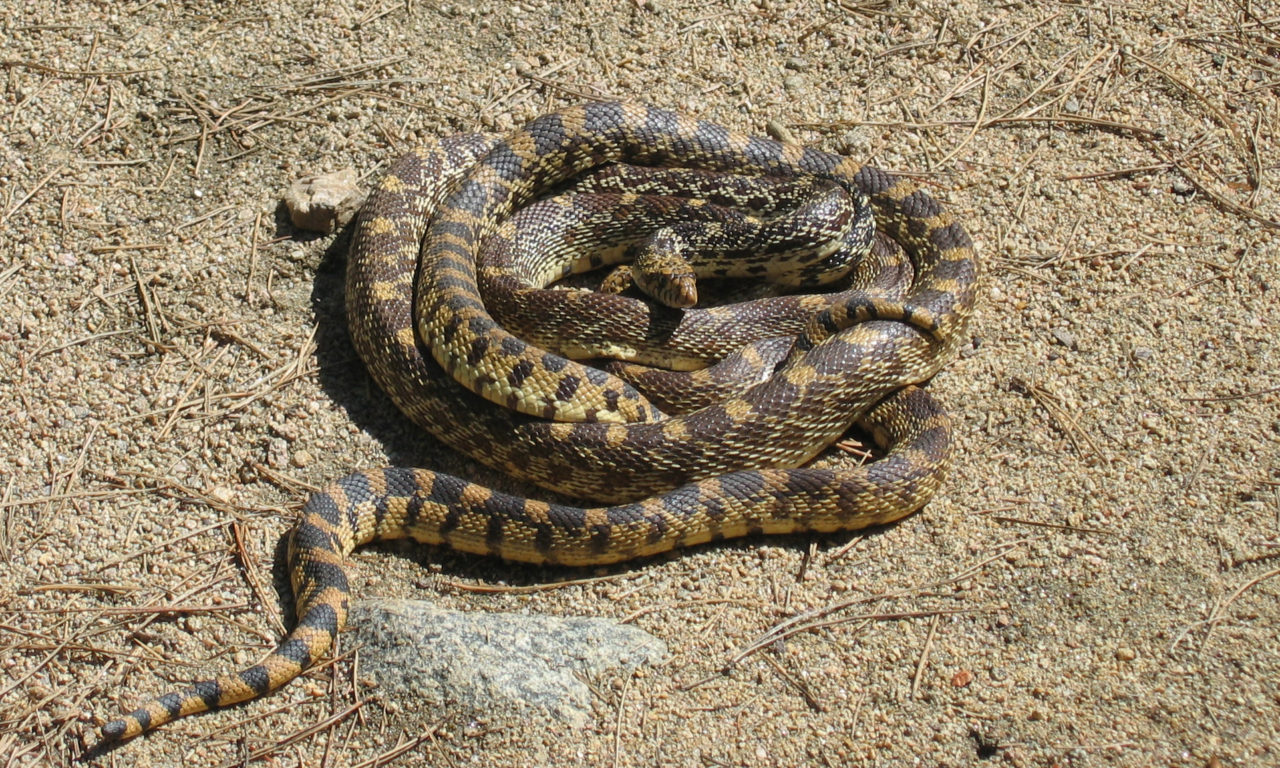 As the weather warms up, snakes, cold-blooded animals, come out of winter dormancy and prowl in search of edible, small critters. From about mid-April to October, depending on the year’s weather, you may find them along local trails, especially in grasslands, agricultural areas, or grassy meadow and rocky outcrops in the foothills. Be aware!

Are you afraid of encountering snakes, especially large or noisy ones? Many people are. That fear is considered an innate and self-saving response rooted in our evolutionary past. Other people are thrilled to see these reptiles and delight in watching them—from a distance and with respect—marveling at their behavior, sinuous movements, and subtle colorings.

Rest assured, Boulder County is home to only one kind of venomous snake: the prairie rattlesnake. The other eleven species of resident snakes are harmless to humans. Most are relatively small and elusive, except the frequently seen bull snake. It may grow up to eight feet long—not a snake you’d easily overlook.

Unfortunately for us and these two snake species, prairie rattlesnakes and bull snakes superficially look alike and that can lead to them being indiscriminately feared, hated, or even killed. It pays to understand how to tell them apart, learn to step back carefully, and enjoy both species as vital members of the natural world doing their job of keeping rodent populations in check.

Prairie rattlesnakes (Crotalus viridis) are pit vipers. The name refers to heat-sensing pits, between the eye and nostril on each side of the wide triangular head, that sense warm-bodied prey. They eat lizards, rats, mice, voles, and young prairie dogs. Rattlers are patterned with gray or brown blotches on a dull greenish or grayish background, have rattles (a series of “buttons”), on the tail tip, small scales covering most of top of the head, and vertical pupils in the eyes. Young prairie rattlesnakes resemble adults, though they have fewer buttons. They are venomous from the start, but not more so than adults.

Bull snakes (Pituophis catenifer) are constrictors. A bull snake will usually seize prey in its mouth and wrap coils of its body around larger prey to squeeze and subdue it. They eat a variety of rodents, lizards, birds’ eggs, and nestlings. These hefty snakes have yellowish background color with brown or rusty brown to black splotches on the back, a neck the same width as the head, boldly patterned pointed tails, and round pupils in the eyes.

These snakes are not aggressive, they defend themselves with warnings. They hiss and/or noisily vibrate their tails in dry grasses, which can spook onlookers into mistaking them for rattlers. Bull snakes are versatile: they climb trees to raid nests for eggs or young birds.

Rattlesnakes and bull snakes may bask on gravel roads and trails to warm up. Give them space to move away at their own speed—they might still be morning-chilly.

Both rattlesnakes and bull snakes go dormant in winter in underground burrows, clustering with others of their kind.

Rattler moms give birth to a litter of ten or so live young in late summer or early fall. Bull snake moms lay up to a score of eggs in sandy ground where the sun will incubate them until they hatch.

Snakes have forked tongues that flick in and out to sample the air for scents. The motion is hypnotic.