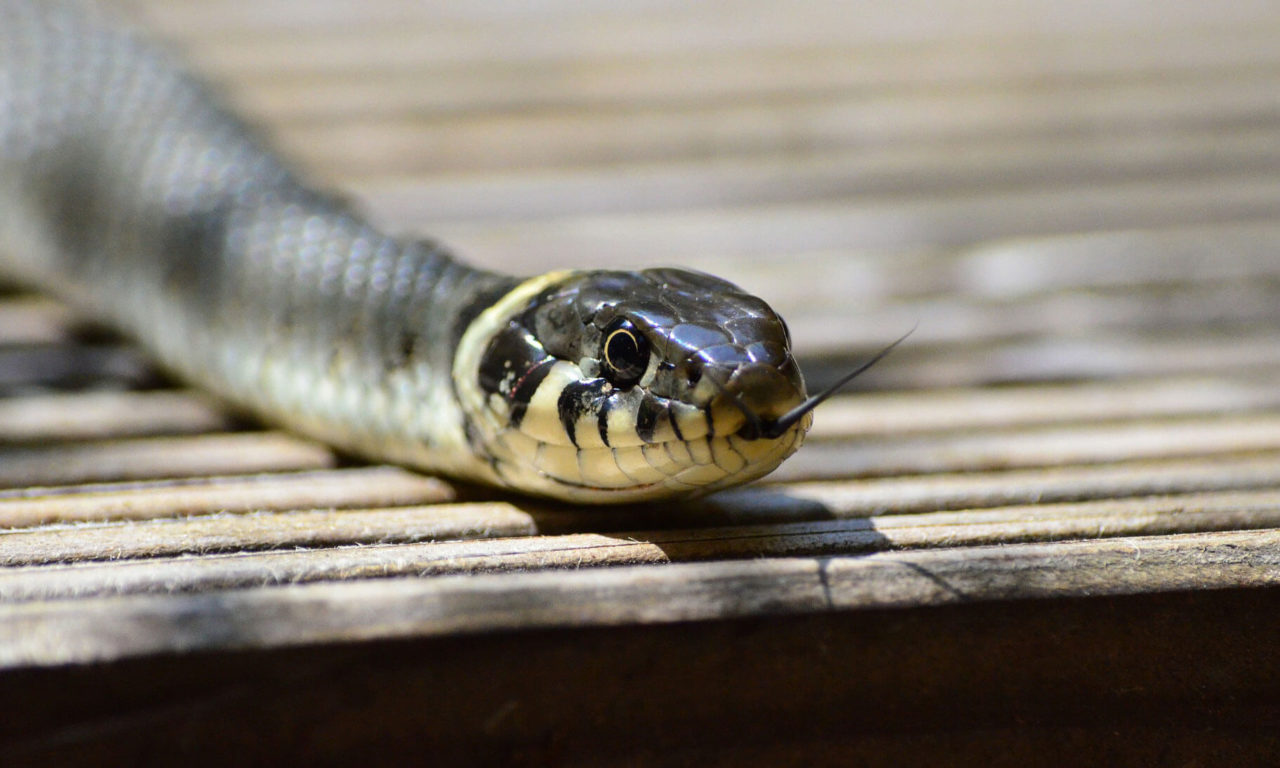 While we finally have some snow sticking to the ground, you may (or may not) have noticed that the snakes have vanished from sight. That’s because snakes are ectothermic, or cold-blooded, and rely on the surrounding environment to regulate their body temperature. As the days become shorter and the weather gets colder, snakes must be free from frost to survive the winter.

Ways to Sleep Through Winter

Many animals hibernate or migrate during this time. Bears gorge on food to store in their bodies and then go into a deep sleep to survive the long winter. Snakes also enter a state of winter dormancy called brumation.

During brumation, a snake’s metabolism and heart rate slows down as its body temperature lowers with the weather. This means that the energy they need from food also decreases. Brumation is not a complete hibernation; whereas bears will sleep for months during their hibernation, snakes are awake but more lethargic. Their bodies don’t completely shut down to sleep the winter away. Being ectothermic, they also do not need fat reserves. Their metabolism slows down so much that they barely use any energy over the entire winter.

When a snake decides to bed down for winter, it prepares by clearing out its entire digestive system. If they continue to eat until brumation, that food in their system will rot inside of them, and they will not survive due to poisoning. Snakes usually eat more leading up to the winter months so they can use the stored energy to survive the cold season. Additionally, they rely on a type of sugar stored in their bodies that can also be used as energy. This allows them to save the energy from their stored fats and gives them a head start on reproduction come spring.

Snake brumation can begin anytime from September to December and last until March or April, depending on weather patterns. So where do snakes go when they disappear for the winter?

Before snakes enter brumation in the wild, they will look for a nice hideout, often getting below the frostline. Typically, this can be hollow logs, tree stumps, caves, deep caverns, rock crevices, and abandoned woodwork—places unlikely to be disturbed by the elements. Snakes also seek shelter in warm, secure places such as old or active prairie dog burrows and dens made by squirrels, other rodents, or even other snakes.

That’s right. Snakes may share the den with other snakes. Sometimes there will be as many as 100 snakes in one cave den. Their group site is called a hibernaculum, and what better way to keep warm than by using the body heat from other snakes to better survive the winter? Males, females, babies, and even different species are welcome to share the den! There is no discriminating when the main goal is survival.

Once in hiding, snakes will stay there most of the time. They are technically still awake, but you won’t see them moving around. Snakes are more vulnerable in consistently cold weather than during the changing of seasons. Just like hikers want to take advantage of a warm spell in the winter, brumating snakes may come out of their dens to bask in the sunshine. They might pop their head out, have a look around, find some water to drink, and then go back to where they were hiding again.

Snakes play an important role in our ecosystem, keeping it healthy by being both predators and prey. In the springtime when the temperature is consistently warm, our Colorado snakes poke out of their winter resting spots and embrace the days ahead. They will resume normal activity and start looking for a mate and some grub.

Until then, if you’re gathering wood for fire this winter and stumble across a hibernaculum, thinking “why did it have to be snakes?!,” just remember that all snakes want is to be curled up and left alone to sleep. So be a friend and just put the log back.