Protecting Dark Skies and the Creatures Below 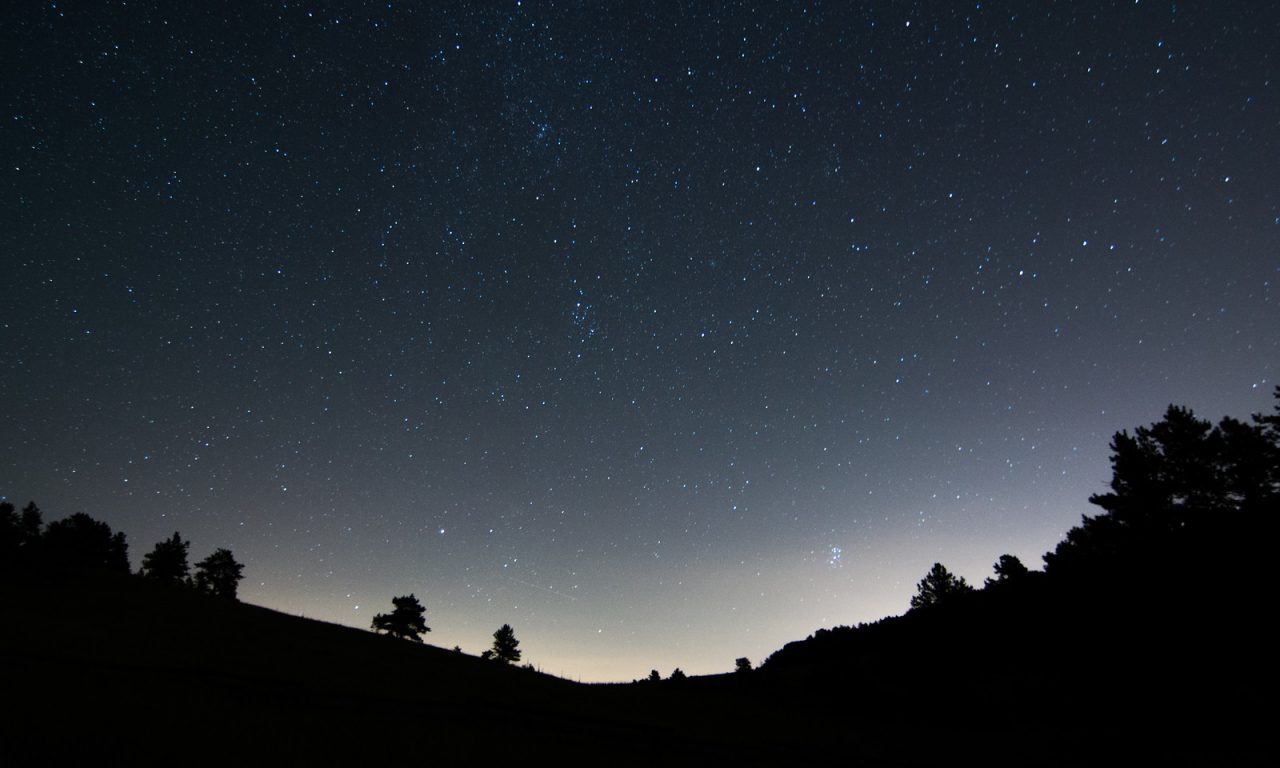 Visitors to Colorado are often awestruck when they see the night sky. There are many places in the world where few or no stars are visible due to light pollution.

The artificially-lit sky that many are accustomed to around the world is now a more common occurrence in Colorado, including in Boulder County. Even the darker sites here are not the sky that many of our ancestors gazed upon, and certainly not the same sky that inspired Native Americans.

In Boulder County, it’s impossible to find a sky that isn’t encroached on by lights from a nearby city. It’s not just the beautiful starry sky that disappears—it’s also the darkness. According to the National Park Service, 62 percent of all animal species are nocturnal and depend on darkness for survival. Artificial lights affect plants as well. A study noted that prolonged exposure to artificial light prevents many trees from adjusting to seasonal variations. This then affects wildlife that depend on trees.

Birds are often negatively impacted by a lack of dark skies, especially during migration. The U.S. Fish and Wildlife Service estimates that five to 50 million birds die each year from collisions with communication towers as a result of confusion from artificial lights. A 1960s study showed that the indigo bunting uses the pattern of stars rotating around Polaris to determine the direction of its southerly migration.

The Milky Way Shows the Way

Birds aren’t the only animals affected by lack of darkness. Dung beetles are the only species known to use the Milky Way for navigation, moths use the moon and stars for guidance, and fireflies communicate with their own light on dark nights. Artificial light breeds havoc for these species in a variety of ways.

People need darkness too. In addition to the simple enjoyment and cultural significance of the night sky, studies are being performed that examine the effects of artificial light on human health and the connection to cancer and other diseases.

Protected lands conserve areas for wildlife, recreation, open views, and agriculture, but they also help preserve dark skies. The National Park Service has been a leader in protecting darkness. In collaboration with their Night Sky office in Fort Collins, Boulder County Parks & Open Space joined forces with the National Park Service, City of Fort Collins, and Larimer County Natural Resources three years ago to collect data on dark skies along the Front Range. Once a year, volunteers go to many of our open space sites and measure the darkness of the sky on a clear night using light meters designed specifically for this purpose.

It may not be difficult to guess that Caribou Ranch near Nederland is one of Boulder County’s darkest open space properties. Light meter readings show that the skies there are approximately 75 percent brighter than a natural sky, while data collected at the Coalton Trailhead in Superior, where much more artificial light is present, show skies at 943 percent brighter. In comparison, the skies atop Trail Ridge Road in Rocky Mountain National Park are about 40 percent brighter than a truly dark sky. Even at over 12,000 feet, artificial light trespasses on the night sky.

How to Help the Skies

One of the main impacts to overly lit skies is the form of lighting used. Homeowners can help by making sure yard lights are shielded to direct light downward, that flood lights are only triggered with motion, and that amber or warm-colored LED lights are used rather than cool blue LEDs that amplify sky brightness. Boulder County is helping in this effort—public lighting installed must shine downward only, reducing the amount of light that shines upward into the sky.

As years go on, it will be interesting to see how this data changes. Will our skies continue to fade away, or reveal the points of light in the darkness of our wild Colorado skies?