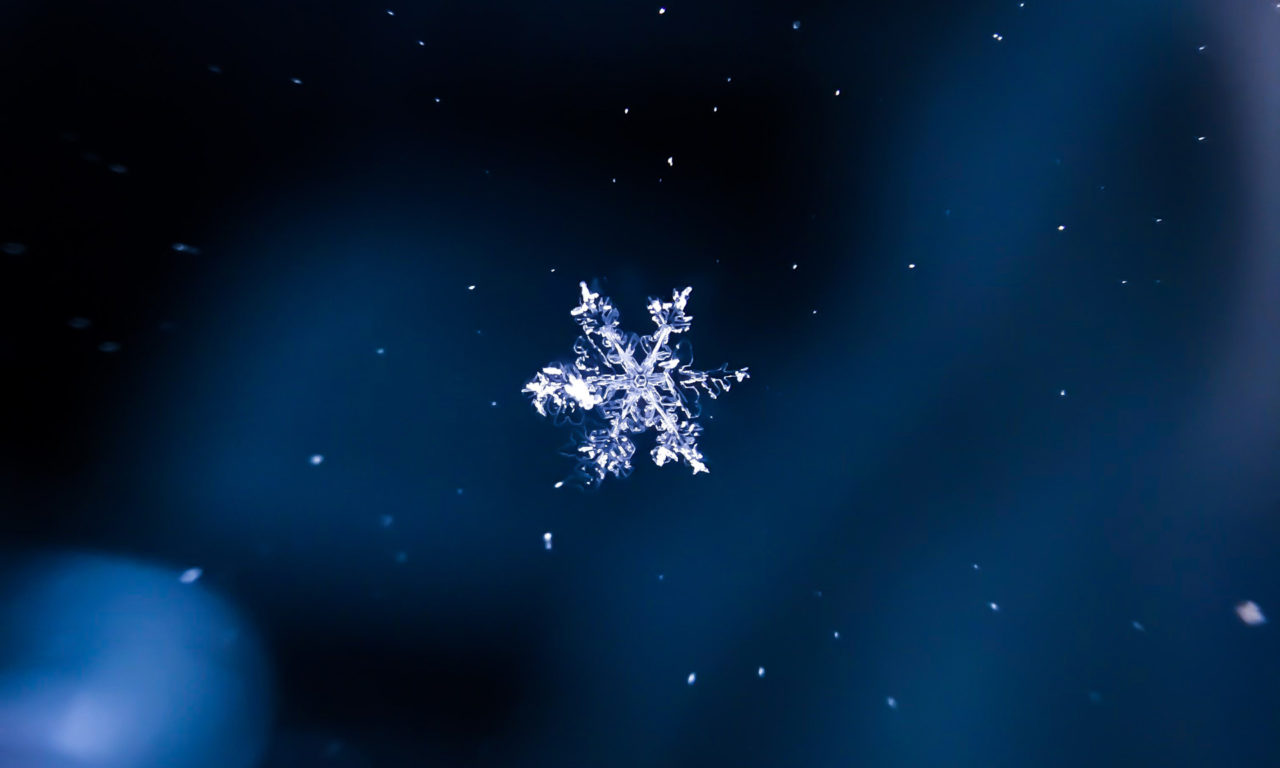 Creating paper snowflakes is a favorite wintertime craft. There is no right or wrong way—just grab some paper, fold it into sixths, and cut away. Each flake will be unique and lovely.

Paper snowflake creation is so simple, but how do real snowflakes form? What gives them their unique shapes? How many different types are there?

Snowflake-making starts up in the cold world of a cloud. A tiny particle of dust, dirt, pollen, or bacteria provides the initial building block for a snow crystal. When this tiny speck gets cold enough, water vapor will stick to it, transforming directly from vapor into ice. This miniature ball of ice grows as more water vapor sticks to it. Because of its atomic makeup, water molecules join together to form rings of six, creating the six-part symmetry of snowflakes. Water vapor continues to stick to the crystal as it forms, and the formation is faster at the corners. This faster growth causes six spokes, or branches, to form. The branches continue to grow as the flake gets heavier and descends through the cloud, adding more water along the way. The temperatures and humidity the snow crystal encounters along the path through the cloud dictate the final shape of the snowflake.

Snowflakes come in many different shapes. The six-pointed star-shaped flakes are called dendrites (tree-like) thanks to their beautiful branches. These flakes form in clouds that have plenty of moisture and a temperature of around 5 degrees. If the cloud doesn’t have as much moisture or if the temperatures are either a bit warmer or cooler than 5 degrees, plate crystals will form. These plate crystals are still six-sided; they just lack the branches of dendrites. At very cold temperatures high in the clouds, column-shaped crystals form. They are very tiny (half-a-millimeter long) and may be solid, hollow, or even hollow with caps made of plate crystals.

Although snowflakes do show symmetry, that symmetry is rarely perfect. Arms of the crystal may grow at different rates or encounter different obstacles on the way down. Twelve-point snowflakes form when two crystals grow from the same starting speck or when two six-pointed dendrites collide on the way to earth. Snowflakes may also encounter small drops of water as they fall. These drops freeze to the crystal forming little bumps called rime. Blobs of rime fall as graupel, or soft hail.

You can catch and examine snowflakes to see their crystal structure for yourself! You just need a piece of black cardboard or foam board and a snowy day. Make sure to place your board outside for a while first so that it’s not too warm to catch the falling snow without melting the crystals. A magnifying glass or the magnifying feature of your smart phone will reveal the unique structures to you. Have fun studying snowflakes this winter!